Game Over!! by Greg Albrecht

I am a huge sports fan. I follow most of the major sports with my wife Karen, who is as much of and in some cases more of a fan than I. In pre-COVID-19 “normal” times we watched many of our favorite teams and athletes on television and occasionally even attended a game or tournament in person. Like tens of millions of other fans around the world we love to see a contest … a game … a match… in which teams and individuals pit their skills as we admire the way those skills have been honed by many years of dedicated training.

Much of the thrill of watching a contest, game, tournament or match is the unpredictable nature of the outcome. Who will win? Who will prevail? Who will take home the trophy? The anticipation of seeing the final outcome keeps fans in their seats, whether glued to their chairs in front of their televisions or in a stadium.

COVID-19 has cancelled, at least for now, “live” games and contests. Karen and I missed a major tennis tournament for which we had tickets. We all missed the opening day of baseball. Fans around the U.S. missed the excitement of the NCAA basketball tournament. The NHL and NBA seasons were terminated. The Master’s golf tournament was cancelled. The Kentucky Derby will not be run this year. The Olympics in Tokyo has been postponed.

Seeking to keep viewers tuned in (and seeking to keep advertisers still willing to purchase commercial time) networks have now, in this COVID-19 era, resorted to replaying memorable and titanic battles of the past. Fans are invited to watch replays already knowing the outcome ….and though we already know the outcome, now we exult in the memory of the victory. Knowing that our team wins in the end is enormously satisfying isn’t it?

As we read and see daily body counts of COVID-19 deaths in the media, the sure and absolute faith that Christ is risen is the ultimate and best hope. That Christ is risen, not just poetically or symbolically, but literally – that he has triumphed over death and the grave – that his tomb is empty – brings us the peace of God that, like a river, as the old hymn says, “attends” our soul.

In the midst of our fragile lives, as we are at the mercy of an unseen virus, the assurance that Christ is risen causes us to float and be suspended in the river of God’s grace. The fact – the fact of all facts – that God in Christ defeated death by his own death is our sure and final victory.

The empty tomb stands supreme as a witness to the greatest victory ever. I’ve been watching a few memorable baseball games of the past. I love to watch these replays. I know what’s going to happen. I wait for the heroic home run that wins the game or the blazing fastball of a pitcher in the ninth inning striking out the opposing side to ensure the victory. I enjoyed it back then – now I relive the moment!

Perhaps, with our athletic metaphor in mind, we might think that we, in our mortal flesh, with all of its pain and heartache, cheer the final outcome of a game or athletic contest still in process because the “fix” is in. We know the final score. Game over!

Our team is so far ahead that the other team will never catch up. We are just watching the time run out on the clock – we are already now, in anticipation, knowing the victorious outcome, celebrating with other fans as we watch. But then we will explode in a frenzied celebration of victory – a victory that is ours because of the grace of God – he has given us the victory of our Lord!

Nothing can stop the final victory – it is inevitable. Like a river, God’s grace flows unabated and it will never dry up. Our Risen Lord is flowing around, over and under us, now and forever. 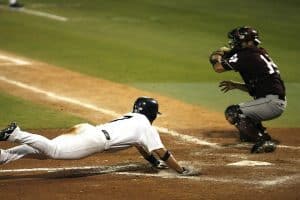 The All Star Game of Faith - Greg Albrecht