Editor’s note: While many believers celebrate the birth of Christ on Christmas day, millions of others extend the celebration of the Incarnation through what they call ‘The Feast of the Nativity’ well into January. In so doing, they think of the Incarnation as encompassing, not only the birth of Christ, but his whole life as God-made-human.
These are the days of the Nativity of our Lord God and Savior, the Incarnation of the living God, the Incarnation of co-suffering Love. The Sunday after the feast, the Gospel story of Herod and the Magi always holds a great revelation for us.
I was asked recently asked online, “Does evidence disprove religion?” Perhaps it doesn’t disprove it so much as it exposes it. Remember, we always try to caution that religion and faith are not the same things.
Herod, you know, was a genuine believer. He was very strict about keeping the kosher laws and the other laws of his religion. Even Caesar makes note of the fact that when Herod would come to Rome—as he had to periodically to promise his fealty to the Emperor—he always refused to eat any kind of pork. And he was very careful about the kosher laws. So we could say he was a religious person.
Of course, he also had several wives and he even killed a few of them. He had numerous children both in and out of wedlock. Yet he was very religious! But this doesn’t mean he had any faith.
So when the Magi came and told Herod, “Look, the prophecies of your religion are being fulfilled and we have come to venerate the one who has been born according to the word of the holy prophets,” Herod believed. He knew the word of the holy prophets. Yes, he was very religious. He knew and he could consult exactly where the Messiah was to be born. But he understood that the Messiah was to be a military ruler, a military king who would take over the land of Israel and rule it and make it great again. 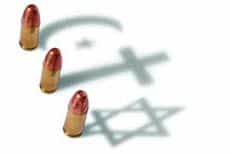