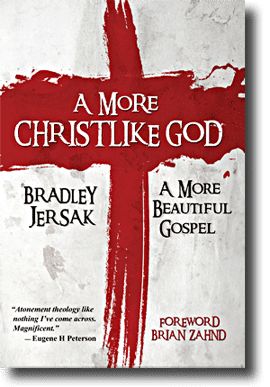 Today I have the honour of reviewing Brad Jersak’s soon-to-be-released new book A More Christlike God: A More Beautiful Gospel.
“God is like Jesus.”
There has been an increasing chorus of voices making this proclamation in recent times. In my opinion, it’s been a very welcome chorus, because it’s a most necessary message.
But… for all its increasing popularity, if this message is not to become a mere soundbite, it needs to be explained, nuanced, understood in all its myriad implications, and generally shown to be the premier way of understanding what God is like.
Enter Brad Jersak.
I hold Brad in high esteem for two reasons. First, it was listening to him speak about the atonement that spurred me on to the earth-shattering realisation that God did not in any way, shape or form kill Jesus – a seminal moment in my theological journey. And second, I had the privilege of meeting him last year. The opportunity to put a name and a story to a face is worth more than many printed words on pages.
Brad is a Canadian author and teacher based in Abbotsford, British Columbia. His active, ongoing experience in the evangelical and charismatic streams and his interest in the Orthodox Church, in which he is a confirmed Reader, give him a unique perspective on what it means to live out an ancient faith in a modern, fast-changing world. Brad has solid theological credentials and is currently part of the core faculty of Westminster Theological Centre (UK).
One of Brad’s gifts, then, is to take profound and complex theological truths and translate them into language that the rest of us can understand.
So… what are the implications of the statement “God is like Jesus”? Brad basically spends three hundred pages answering this question.
The book is divided into three parts. In the first part, “What is God? Competing Images of Will and Love”, Brad surveys predominant images of God that have held sway through the ages, drawing a distinction between those understandings of God based on sheer, omnipotent will and those earthed in pure love. He concludes this part by pointing to the fullest revelation of God we have: “Word Made Flesh: The Christlike God”.
The second part is titled “The Cruciform God”. Such terminology may be nothing new to readers of Hans Urs Von Balthasar, Jürgen Moltmann or assorted other recent theologians. But Brad goes a long way in exploring what it means in practical, twenty-first terms to say that God is most perfectly revealed in Christ upon the cross. For me, the real heart of his book is here, in chapters 7 and 8, “The Cross as Divine Consent” and “The Cross as Divine Participation”. Drawing on sources old and new, he dares to reconcile the idea of the God who is Love with the reality of pain and suffering that we observe all around us day to day. In my experience, such honesty is rare in a Christian book written for a “popular” audience. Yet, even as he confronts head on the brutal reality in which we live, Brad refuses to let go of his core thesis that God really is like Jesus – that is, he is not only sympathetic to our plight, but is deeply and personally involved in it alongside us.
In the title of third and final part of the book, Brad coins a new and delightful word that I hadn’t previously come across: “Unwrathing God”. The prevalence of the notion of God’s wrath throughout both testaments of scripture is deeply problematic to many Christians who would sincerely like to believe that God is as compassionate and forgiving as Jesus on the cross, but who can’t ignore the frequency with which this word is mentioned. Well, there’s no need to ignore it: the author sets himself the seemingly impossible task of keeping hold of the perceptible fact of wrath as referenced throughout scripture, while at the same time remaining utterly committed to the truth of the Christlike God who chose to submit to humanity’s wrath, at the cost of his own lifeblood, rather than exercise any proactive wrath of his own.
A More Christlike God is that rarest of things: a deeply theological book that an average reader can comfortably absorb without feeling at all intimated. The combination of theological sources old and new and Brad’s own exegesis and pastoral experience makes this a book that is easy to relate to, wherever you happen to be on the theological spectrum. The use of in-page callouts to define important and potentially problematic terms is a particularly nice touch. And, as I said in my review of Brad’s book Her Gates Will Never Be Shut, Brad has a gift for making compelling, hard-to-ignore points without once slipping into dogmatism. You will come away from this book with the feeling not that you have been lectured, but rather that you have just finished a richly engaging and personal conversation.
A More Christlike God is due to be released in early May. It is available to order here, and will be available via Amazon on or around 7 May.
Please share: