The Judgement of the Cross – Rob Grayson 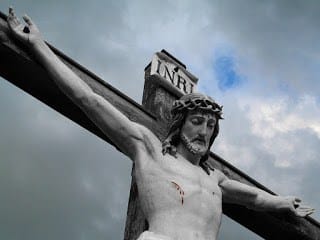 “Now is the judgement of this world; now the ruler of this world will be driven out.” (John 12:31)
Christians are generally accustomed to speaking of the cross as the place and time where God enacted judgement on the world. But what does this actually mean, and what are its implications?
Usually, the cross as the place of judgement is understood to mean the physical location where God poured out his wrath upon Jesus. Here, wrath is understood as the punishment for our sin which God, in his justice, is obliged to mete out: namely death. And Jesus, the sinless Lamb of God, gamely hangs on the cross in our place and bears the brunt of God’s implacable justice so that we, in spite of our sin, can escape punishment.
And the cross as the time of judgement is understood as the point in history when God sovereignly intervened in human affairs to solve humanity’s sin problem as described above.
So there we have it: time and place come together at the cross as Jesus bears God’s punishment for our sin. This, then, is the judgement of the cross: a resounding verdict of “Guilty!” pronounced upon the human race by God, accompanied by an unappealable death sentence. The twist is that Christ comes in as an innocent victim to serve the sentence in our place.
This is what I believed without a second thought for most of my Christian life. Until I began, through a process of reading and thinking, to see some gaping holes in it:
Hole number 1: In this view, God is not free to simply forgive sin; he is beholden to a higher principle of justice that must be obeyed. This is a major philosophical and theological problem, because if God is God, there clearly cannot be any higher principle than himself by which he is bound.
Hole number 2: Following on from hole number 1, since God is bound by a higher principle of justice that must be satisfied, the only way he can forgive us is through some kind of transaction. His end of the transaction is that someone has to die, since the wages of sin is death. Jesus agrees to be that someone, so God can now forgive us because his perfect son has died in our place, thus balancing the scales of justice. The problem here is that this is supposedly the same God who elsewhere in scripture instructs us to freely forgive others, even as we have been forgiven. So God requires a different standard of his children – free forgiveness – than he himself is prepared to meet. Hmm.
CLICK HERE to continue
Please share: