What does the Cross reveal? – Caleb Miller 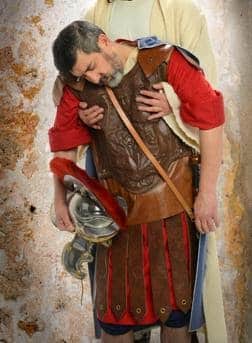 The cross of Christ is much more than just a horrendous method of torturing someone. The cross reveals to us the heart of humanity, rather than the heart of the Father. The cross gives us a picture each and every year of the depths of human depravity and violence.
For the life of me, I cannot make sense of any atonement theory that says the Father punished Jesus, emptied his wrath upon Jesus, used Jesus as a cosmic go-between to save people from the fury and anger of the divine dungeon master or any variation thereof. That is extremely basic faith. The church fathers didn’t propose PSA1 as a view on the atonement because it laid waste to the Trinity. We’re so inundated with modernity though, we have no idea why.
To propose that the Father turned his back on the son, poured out his wrath on the son, or otherwise judged him for our various actions (except other religions and gayness, Jesus didn’t include those in his death) we say that there was a moment when Father and Son were not “of the same being, of the same substance”. They become a cosmic good cop, bad cop with Jesus becoming the happy hippy arm of the furious old man in the sky.
Never mind that Paul said “God was IN CHRIST reconciling the world unto himself”. Sort of hard to forsake or “turn on” someone you’re in.