Who WAS and IS and IS TO COME – Greg Albrecht 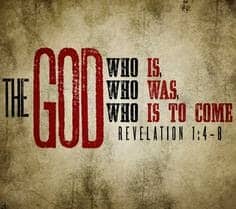 The revelation of Jesus Christ, which God gave him to show his servants what must soon take place. He made it known by sending his angel to his servant John, who testifies to everything he saw—that is, the word of God and the testimony of Jesus Christ. Blessed is the one who reads the words of this prophecy, and blessed are those who hear it and take to heart what is written in it, because the time is near.
John,
To the seven churches in the province of Asia:
Grace and peace to you from him who is, and who was, and who is to come, and from the seven spirits before his throne, and from Jesus Christ, who is the faithful witness, the firstborn from the dead, and the ruler of the kings of the earth.
To him who loves us and has freed us from our sins by his blood, and has made us to be a kingdom and priests to serve his God and Father —to him be glory and power for ever and ever! Amen.
Look, he is coming with the clouds, and every eye will see him, even those who pierced him; and all the peoples of the earth will mourn because of him. So shall it be! Amen.
”I am the Alpha and Omega,” says the Lord God, “who is, and who was, and who is to come, the Almighty.”—Revelation 1:1-8 (my emphasis)

﻿“Who IS, and Who WAS, and Who IS TO COME.” This phrase begins with the word “who”—a reference to Jesus Christ—and ends with the word “come”—which is also a reference to Jesus Christ, and his comings.
When people think of Jesus, they think of either one, or at the most, two of his comings. They often think first of what is popularly called his “first” coming—the coming of God, to this earth, in the person of Jesus. The first coming is the Who was in the title of this article and in the first chapter of Revelation.
Next, they think of what is popularly called his “second” coming—the future coming of Jesus to this earth. The second coming is referenced by Who is to come.
There is a third coming mentioned —Who is. Jesus is here now, in the present, he is risen, he is alive and he lives in the hearts and minds of those who love him and have surrendered their lives to him.
Who IS, and Who WAS, and Who IS TO COME.