Chasing 120—A Story of Food, Faith, Fraud and the Pursuit of Longevity 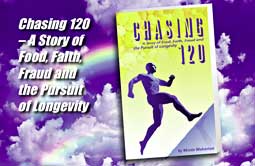 A winner of the 2015 Illumination Book Award

Endorsements and Comments from Readers

Monte Wolverton’s first novel is a heady brew of faith and finances as people’s spiritual hungers are exploited by an unscrupulous man bent on making money under the guise of making disciples. Chasing 120 will take you on a ride through the perils of greed, misplaced faith, and awakening to the truth no matter how painful. – Wayne Jacobsen, author and President of Lifestream Media

What a pleasure it was to read Chasing 120 – A Story of Food, Faith, Fraud and the Pursuit of Longevity by Monte Wolverton. Having known Monte for almost 20 years, I know he has the necessary credentials and experience to write this fascinating story, filled with Christ-centered, real life lessons. Monte addresses some contemporary concerns and problems, as they might meet in a “perfect storm” with dysfunctional Christianity. This story moves and keeps the reader interested – from beginning to end. You won’t regret reading it, and I am certain you will recommend it to friends. This story is guaranteed to both entertain you and to make you think. – Dan Wooding, author, broadcaster, journalist, and founder of the ASSIST News Service (www.assistnews.net)

“Chasing 120 brings to the forefront issues that surround us today, with so many people following rogue religions and corrupt politicians, instead of educating themselves, asking questions, and standing up when something isn’t right. This book is a delightful read that from the beginning to the end will have your mind wondering how much it actually parallels what is going on in today’s world with the hunger for youth and longevity at its peak. Are you chasing 120?” – Christi Silbaugh – Freelance writer

When I received Chasing 120 I thought I would just read a few pages at first, but before I knew it I was half way thru the book, it just sucked me right into the thick of the plot and I couldn’t stop! I had to do some work so I laid the book down but two hours went by and I had to get back to it again and finish it. I hope that Monte Wolverton will make a series of books around “Josh ” getting involved in family crises. What a fantastic little book! – Reader from Ohio

I could not put Chasing 120 down – spellbinding, and so easy to relate to somewhat similar religious experiences I have had. This is a must read! – Florida

My husband started to read Chasing 120 in the evening, and then continued to read it in bed. I asked him to turn out the lights so he finished it by flashlight! – California

Plain Truth Ministries always publishes books worth my time! When I saw Chasing 120 was your first fiction book I wondered if your perfect record of “worthy of my time” books would continue. The record stands unblemished. Great book – I recommend it to others! – Texas

I think I was among the first to read Chasing 120 – well worth it! I will tell others about this great little book – my only regret is that it wasn’t twice as long! – New York

Chasing 120 is a great insight into the twisted world of deceptions and persuasion – in my case both the health food and the religion industries have taken me for long rides down the primrose lane. I absolutely identify with Chasing 120. It is a must read. – Georgia

Monte took the core motivation of the business world (profit/greed) and masterfully wove it into the fabric of religion and government revealing them as they truly are. In doing so, the word pictures were so descriptive and real I did not sense I was reading but felt I was actually there! The broad spectrum of scientific issues seemed well researched and quite plausible. The characters seemed so familiar and easily identifiable. It was indeed compelling, spellbinding and though I didn’t want to put the book down I had to digest it in two sessions. – Tennessee

A moral (from Latin moralis) is a message conveyed or a lesson to be learned from a story or event. The moral may be left to the hearer, reader or viewer to determine for themselves, or may be explicitly encapsulated in a maxim. A parable is a succinct, didactic story, in prose or verse, which illustrates one or more instructive lessons or principles. Whether we call it a moral tale or a parable, “Chasing 120” is a clear warning of the dangers posed by anyone who abuses biblical texts and practices to pedal personal agendas and products. The morale of this story might be summed up in the old adage: Do NOT check (leave) your brains at the church door. There will always be people around who are only too happy to manipulate anyone longing to believe in something (i.e. all of us). “Chasing 120” should remind us of the apostle Paul’s admonition to “prove all things.” Furthermore, I am reminded of a warning from evangelist Ravi Zacharias who was once told by a fellow seminary student (when asked why, given his avowed absence of belief in God the student would continue in a seminary program): “There’s good money in the god game.” “Chasing 120” is a cautionary tale reminding us that in everything (and especially in faith and religion) we should remember the warning “caveat emptor.” It’s a great read! – British Columbia, Canada

A Story of Food, Faith, Fraud and the Pursuit of Longevity
By Monte Wolverton
Perpetually grinning, fast-talking Texas adman-turned preacher Dr. Tyler Belknap promises health and longevity to a cult following via his nationally televised daily infomercial programs. The meteoric success of Belknap’s Wellness 120 empire is fueled by “the pursuit of longevity,” touted by Belknap as a biblically-based promise of 120 healthy years for those who follow his regimen and purchase his nutritional products.