Is the Cure worse than the Disease?

The author Athanasius Yohan I  (K.P. Yohannan) is the Metropolitan of Believers Eastern Church which has 57 dioceses and more than 12,000 congregations throughout the world. More than four decades ago, K.P Yohannan founded GFA World, which has become a significant charity helping those in need across Asia. He has authored more than 250 books, including Revolution in World Missions with more than 4 million copies in print.

A few months ago I saw a picture that I can’t get out my head. It was of a little boy, maybe 5 years old, sitting on a sidewalk of a normally busy city utterly grief-stricken hanging onto another little boy, most likely his brother, both of them weeping. You could see that they felt like their lives were over. They were in Mumbai, a city with 20 million people and around 100,000 beggars.

Suddenly there was a lock-down. Suddenly no passersby. No looks of compassion. No money. No food. Nothing. They were alone without anything and with nowhere to go.

This picture is a window into the lives of millions who are faced with starvation: daily wage labourers, beggars and villagers who, even before COVID-19, were living from day-to-day for sustenance. With lock-downs and job losses, everything instantly went from bad to worse for those who were barely making it.

COVID-19 has caused one of the greatest levels of suffering around the world. Illness. Isolation. Depression. Anxiety. Hunger. Death. The face mask has become a symbol of our deeply troubled times. But we cannot mask our eyes from the injustice and suffering that’s inflicting thousands of families across Asia right now.

Every day, I work with my church leaders throughout Asia to help people survive this pandemic—not just survive a disease, but survive the devastating effects of the lock-downs, mainly starvation.

Like so many world leaders, the Prime Minister of India imposed strict guidelines at the start of the pandemic to curb the infection rate. In one month, 91 million people, many of whom were daily wage labourers, lost their jobs. All were breadwinners who depended on daily work to feed their families.

While many of us living in more developed countries are feeling the pinch after six months, many daily wage workers in Asia have been fighting a battle against starvation from the first day of lock-downs. Many, surprisingly, do not fear the virus; they fear the hunger that will come from the virus and the procedures to fight it.

I know lock-downs are meant to help save lives, but what if the cure is worse than the disease? According to an urgent call to action from the United Nations, virus-linked hunger is leading to the deaths of 10,000 more children a month. How many people are we going to starve to death in order to protect them from COVID-19? I know of dire circumstances that families are facing with their children starving to death before their eyes.

The United Kingdom and many European countries are proposing further lock-downs or restrictions as COVID-19 cases once again spike. As I read about ‘pandemic fatigue’ or watch the protests in Trafalgar Square, it’s clear that these measures are paying a price on people’s economic, mental and physical conditions.

Lock-downs, while still being meritorious efforts to put boundaries around the coronavirus, are have lasting consequences on individual life.

I’ve repeatedly said that for hundreds of millions of people living in Asia, starvation is 10 to 20 times more dangerous than the disease. This is true, especially for the poor. Some people are saying the pandemic could push around 122 to160 million people deeper into poverty and hunger because of lack of jobs and the present economic fallout in many nations.

The continuous reports I hear from my church leaders in Asia tell me the same story.

Our governments need to take measures to slow the spread of COVID-19, yes, but we also need to think more deeply about what’s best for the people. The issue is not how to protect people from a disease, but how to minimize the world’s suffering during this crisis. This requires a broader way of thinking.

Every day my church leaders and church members fight to keep one more family alive. Even in the middle of lock-downs, they’re giving away hot meals or food ration packets. Hundreds of people line up, waiting for a lifeline, and our people are there to help them.

“We know the risk we’re taking,” I remember one Bishop saying, “But we must go out and keep doing what we’re doing. This is sometimes the only food they’ll get in three days.”

History records how the early church responded to pandemics: They loved people and took care of them. What can we do to help others during this time?

When people see they are not alone, that there are others who are willing to give so that they may live, it changes their life and gives them hope.

“We thought it is better to die and not live in this world as nobody had come and helped us,” one villager in Asia told us. “If you would have not come and given the food items, we would have definitely died in hunger.”

They no longer fear dying of starvation because someone was there to help them in their greatest hour of need.

Whether it’s someone in the poorest areas of the world or our neighbour next door, who can you help get through this difficult time? We cannot help thousands on our own, but we can each help at least one. 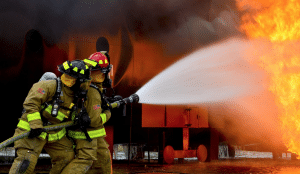 Q&R with Brad Jersak - "Do ECT & PSA hold any theological merit for you?"

Q & R - If we're already forgiven, why strive to be good? Isn't that salvation by works? --Brad Jersak