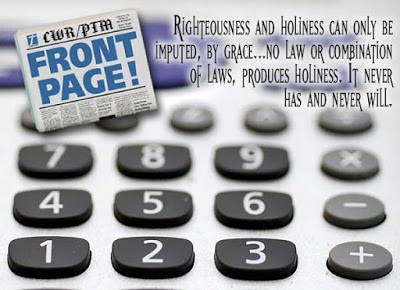 Recently I was asked about a church pastor who preaches 10 percent
grace and 90 percent law. Apparently this church has a clock counter on
its website to show how fast people are getting to hell. This church
believes that one of the methods of “saving” people is to expose their
sins, and (by embarrassing them) guilt them into obeying God.

This church is but one of many which believes that the Ten Commandments (and at times other portions of the old covenant) must be preached to sinners to prepare them to accept Christ.

The idea is taught in several different ways:
1) People must be convinced that they have a problem (that they are sinners) before they are given the Answer.
2) Before people can appreciate the gospel (good news) they must first understand the bad news—their own predicament.
3) Before people are motivated to be rescued and saved they must realize  that they are lost.

This kind of preaching is based on guilt and shame—it is
religious legalism, not the gospel! The idea of such preaching is to
send listeners or readers on a guilt trip—then rescue them from the
artificially imposed manipulation of guilt.

Send them to hell so that they will appreciate heaven.
Expose people’s sins, so that in their embarrassment they will accept
Christ!?!

Wow! Does that sound like Jesus? Where do we find Jesus doing
such a thing? The only people or system that he exposed were those who
thought they were so religiously superior—the very ones who were running
around exposing and “condemning the hell” out of everyone else! We
don’t find Jesus “exposing” those who did not pretend to be religious.

Nothing in the New Testament gives instructions to Christ
followers to inflict this kind of devious, manipulative preaching on
others, in the name of God. The New Testament tells us that people are
brought to Jesus for their salvation. It does not indicate that people
are saved by shaming them through condemnation.

This kind of teaching leads to externally based criteria—this
kind of preaching (which is really not the gospel at all!) is all about
how people are disobedient, how they need to start keeping the law, how
they need to start pleasing God, etc. The word “grace” is used
(amazingly, the church about which I was asked actually admits that it
preaches 10 percent grace and 90 percent law) but not understood.