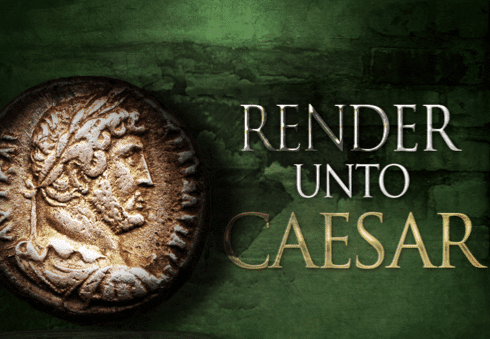 Then the Pharisees went out and laid plans to trap him in his words. They sent their disciples to him along with the Herodians. “Teacher,” they said, “we know you are a man of integrity and that you teach the way of God in accordance with the truth. You aren’t swayed by men, because you pay no attention to who they are. Tell us then, what is your opinion? Is it right to pay taxes to Caesar or not?”
But Jesus, knowing their evil intent, said, “You hypocrites, why are you trying to trap me? Show me the coin used for paying the tax.” They brought him a denarius, and he asked them, “Whose portrait is this? And whose inscription?”
“Caesar’s,” they replied.
Then he said to them, “Give to Caesar what is Caesar’s, and to God what is God’s.”
When they heard this, they were amazed. So they left him and went away.—Matthew 22:15-22

During these early years of the 21st century, we North American Christians have struggled between loyalty to the countries in which we live and our faithfulness to God. In the last few years we have been challenged by what is called the war against terrorism, including the war in Iraq and Afghanistan. Our daily news informs us of seemingly endless bloodshed in the Middle East, not to mention the saber-rattling, or perhaps better described as “bomb blustering,” from Iran and North Korea.
There are a variety of Christian responses to warfare. Wherever Christians have lived and whenever they have occupied their place in history, Christianity has responded to war in a variety of ways. As with many issues, there are two extremes.
There are many faith communities that consider themselves Christian who see God on one side and government of any kind on the other. Government, by its very definition for such folks, is corrupt, evil and self-serving.
While there are times when we are all inclined to believe in this perspective, it does ignore fundamental issues that face Christians in this world. Does our calling as Christians mean that we should escape to a remote area, build a little log cabin, dig a well for fresh water, grow an organic vegetable garden and watch the world go to hell in a handbasket?
CLICK HERE for the rest of Greg’s article
Please share: