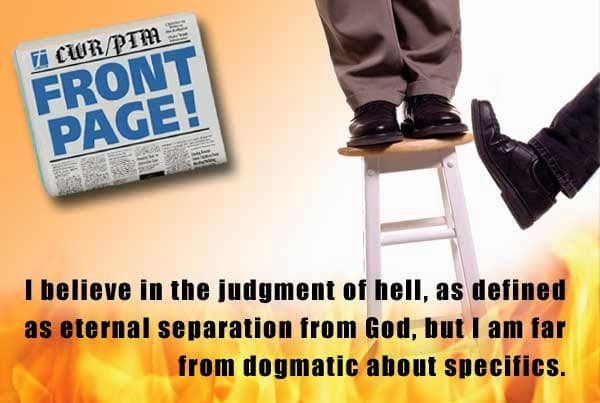 Hell is a subject many religious people get all hot and bothered about. It’s one of the most disputed and controversial teachings within Christendom. The squabbling is not about the surety of judgment for depravity and wickedness. Most Christians agree that there is and will be divine judgment for evil. The battle for hell is all about specifications, temperature and longevity. The debate involves comprehending and communicating divine justice—and in the process humans export definitions of time and space into eternity.
But the Bible does not suggest that God needs to import our flawed perspectives into the perfection of his eternity. While the Bible is remarkably silent about hell’s specifications, cool heads seldom prevail when precise speculations about hell are on the table. When theories such as the degree of suffering that exists in hell, how hot hell is and how long it lasts are under discussion, blood pressures rise and tension fills the room.
Some Christians take the view that hell is the battleground of true faith. Some draw a line in the sand in defense of the hottest kind of hell possible. Any other view of hell is discounted as a liberal, progressive, faith-denying, slippery-slope perspective that owes its existence to soft-headed humans rather than a theology that insists on sinners in the hands of an angry God. In some religious circles, belief in the most excruciating hell that humans can imagine and describe has come to be seen as one of the acid tests of true Christianity.
There are Christians who believe in judgment, but they are not as dogmatic about all of the details. I am one of those Christians. I believe in the judgment of hell, as defined as eternal separation from God, but I am far from dogmatic about specifics. I believe that the presumed necessity of eternal torture as a vindication and satisfaction of God’s wrath is a violent contradiction of God’s love and character as revealed in the Bible.
CLICK HERE to read more
Please share: