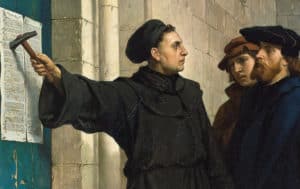 I’ve spent so much of the past ten years reading, thinking with, and writing about Martin Luther’s theology, and teaching his thought at three universities. But I confess at this point I have very little interest in the idea of Luther, or in hagiography, or in his specific denominational legacy, or in his personality, or in his politics, or in his insults or his beer or whatever. And I disagree with quite a few of his main insights, and that’s before we even get to the hateful stuff.

But there remains no theologian I learn more from or I am more keen to teach. In the end if I am honest I am interested in Luther as a kind of artist who at his best transmuted his personal sufferings into theological ideas that can inform an utterly compassionate vision of Christianity as a religion of honesty and mercy for suffering and screwed up human beings. At his best – and he was very often not at his best – Luther remains unsurpassed here.

If I wanted to boil what I think has been most worthwhile for me down to a few points, on this quincentennial day, they would be these:

1. As a theologian, I return again and again to Luther’s theological method, especially his highly dynamic and creative way of transmuting his own sufferings and experiences into theological insight on behalf of others, in dialogue with Scripture. In this again I think he is usefully understood as a kind of artist or poet rather than simply as a thinker or exegete, and I think this is part of what Kierkegaard meant in his journals when he called Luther an ‘extremely important patient for Christianity’. As Luther puts it, ‘in tribulation [the exegete] learns many things which he did not know before; [likewise,] many things he already knew in theory he grasps more firmly through experience’ (WA 3:44; LW 10:49). We can seek to follow this method without having to agree with what Luther actually concluded at any given point. And I do personally think that a dose of this kind of experientialism, done well, is what theology today needs more than anything.

2. Luther’s account of the persistence of sin in the Christian in the later parts of Against Latomus is probably the darkest such account we have anywhere in the tradition, and in this it is enduringly profound. ‘[T]he motion of anger and evil is exactly the same in the godly and the godless, the same before grace and after grace’ (WA 8:91; LW 32:207). Luther argues at one point here that the way that sin persists in Christians is quite precisely analogous to the way that physical death persists: its ‘reality’ and ‘substance’ is unchanged, but its ‘sting’ is taken away. In this he is taking a major strand of Christian tradition and turning it up to eleven. In practice, the account in Against Latomus can and should function as a kind of firewall of divine mercy for Christians who feel like failures; there is no circumstance it cannot encompass. These bits of Against Latomus are not all that Luther had to say on the subject of the Christian life but they are the parts that have stood out the most to me over the years.

3. Luther’s distinction between Law and Gospel, loosely held and experientially/affectively understood, remains one of the most powerful diagnostic tools for making sense of what people I see around me actually do in their lives – all the anxious striving – and why it so rarely feels like ‘enough’, and for explaining the power of Christianity as a clear-eyed but utterly compassionate response to this. It is a shame that this aspect of his thought which pastorally-speaking has dated so little in 500 years (in our cultural moment of performancism and overwork) has been so misunderstood in recent theology.

4. The theology of the cross, as expressed with such simplicity and depth in the Heidelberg Disputation, seems to me to match the reality of life as it is very often actually experienced by human beings in the world, better than any other such category I have come across. ‘God can be found only in suffering and the cross’ (proof of thesis 21). Whatever their tradition (or anti-tradition), students always respond to this extraordinary text, which (with the Disp. Against Scholastic Theology) is I think the paradigmatic example of Luther’s art.

Other people can talk about his theology of the Bible, his view of the sacraments, his relationship to modernity and authority and all the rest, but for me these are the reasons I continue to be interested in the legacy of Martin Luther in 2017.

This article first appeared on Mockingbird.com HERE and is used by permission.