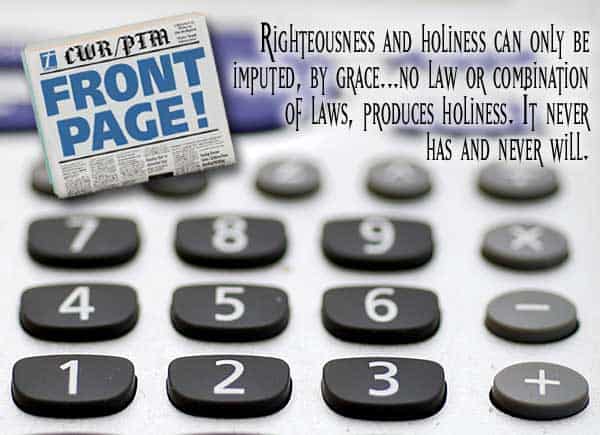 Recently I was asked about a church pastor who preaches 10 percent grace and 90 percent law. Apparently this church has a clock counter on its website to show how fast people are getting to hell. This church believes that one of the methods of “saving” people is to expose their sins, and (by embarrassing them) guilt them into obeying God.

This church is but one of many which believes that the Ten Commandments (and at times other portions of the old covenant) must be preached to sinners to prepare them to accept Christ.

The idea is taught in several different ways:
1) People must be convinced that they have a problem (that they are sinners) before they are given the Answer.
2) Before people can appreciate the gospel (good news) they must first understand the bad news—their own predicament.
3) Before people are motivated to be rescued and saved they must realize that they are lost.

The New Testament tells us that people are brought to Jesus for their salvation. It does not indicate that people are saved by shaming them first through condemnation.
This kind of preaching is based on guilt and shame—it is religious legalism, not the gospel! The idea of such preaching is to send listeners or readers on a guilt trip—then rescue them from the artificially imposed manipulation of guilt.

Send them to hell so that they will appreciate heaven. Expose people’s sins, so that in their embarrassment they will accept Christ!?!

Wow! Does that sound like Jesus? Where do we find Jesus doing such a thing? The only people or system that he exposed were those who thought they were so religiously superior—the very ones who were running around exposing and “condemning the hell” out of everyone else! We don’t find Jesus “exposing” those who did not pretend to be religious.

This kind of teaching leads to externally based criteria—this kind of preaching (which is really not the gospel at all!) is all about how people are disobedient, how they need to start keeping the law, how they need to start pleasing God, etc. The word “grace” is used (amazingly, the church about which I was asked actually admits that it preaches 10 percent grace and 90 percent law) but not understood.

If even one percent law is preached, the grace of our Lord and Savior is not preached. One percent required-for-salvation law keeping so dilutes, waters down and poisons the gospel that it is no gospel at all. That’s the absolutely clear message of the book of Galatians. This kind of teaching completely ignores the fact that once we are in Christ, because of God’s grace, we are changed from the inside out.
When the risen Lord lives his life in us he transforms us into his “workmanship” (Ephesians 2:10) so that we are obedient to Jesus Christ. We are obedient because he lives in us.

The New Testament, conversely, DOES NOT teach that we make ourselves loved by God, and accepted by him, because of our obedience. That is a false gospel, specifically the heresy called Galatianism!

When we obey laws, externally, that obedience does not bring about internal transformation. Jesus is not produced by morality. Morality does not produce Jesus. Nor, on the other hand, does Jesus do something because it is the right thing to do.

What Jesus does becomes the definition and standard—it is then the right thing to do. Christ-centered morality is produced out of a transformed heart, out of the inner beings of those in whom Jesus lives, for, as he promised, living waters will flow out of us (John 7:38).

There are many forms of legalism within religion. This specific one about which I was asked appears to have its roots in what is popularly known as “Puritanism.” The approach of Puritanism, and those in the holiness movement at large (which is sadly still alive and well) was that a man is made holy on the basis of deeds.

Holiness is found, in this view, through external obedience to God’s laws. This approach leads to a deification, or at least to a semi-deification, of the Ten Commandments—with plaques, monuments, embroidery, tapestry, extolling the law—but not the Savior.

Many people who fall for this deception and call themselves Christians would never dream of displaying a cross in their home, but they will instead festoon their living environment with Ten Commandment posters and plaques.

The failure of this approach can be demonstrated over and over again—in spades (I use the card analogy on purpose, to remind any reader that card playing, of and by itself, is not a sin). The law fails to bring righteousness and holiness.

Righteousness and holiness can only be imputed, by grace—produced by the indwelling of our Lord and Savior. No human or group of humans, no law or combination of laws, produces holiness. It never has and never will.

There is a sense in which the law prepares the way for the gospel—and that sense is this: The law demonstrates the complete bankruptcy and inability of humans to make God love them more because of their obedience. The law leads to Christ in the sense that the cross obliterates the law as a system of worshipping God.

For Christians, Jesus is the very center and foundation, he is in the spotlight of our worship—and he does not share that spotlight with any ethical system, whether it be the old covenant, or some other code of law.

As hard as religious legalism may try, Jesus will never allow the pills, prescriptions and potions of religion to take away his rightful place.

We become in Christ (because of who and what he is, and what he works in and through us) all that he wants us to be.

The idea of 10 percent grace and 90 percent law is yet another legalistic system of religion—it is getting the cart of law-keeping and moralism ahead of Jesus. It is religion, not relationship. It is hopelessly flawed, and anti-Christ by its very methodology.