A Covenant – Not a Contract! 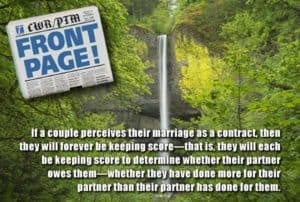 There is probably no other human endeavor quite like marriage—sadly, many of these partnerships that begin with such hope and expectation regularly fail. One of the reasons marriages fail is because many see marriage and the entire relationship through the eyes of a contract rather than through the perspective of a covenant.

Marriage, an example of a human covenant, can help us to understand the divine relationship God offers to each of us. He offers us the new covenant in Christ, not the new contract in Christ. It’s a covenant, NOT a contract!

• A contract is a legally binding agreement between two parties, a business agreement which stipulates that work be performed or services rendered in exchange for a price.

• A contract stipulates that if one party scratches the back of the other, then the other party will return the favor.

• A contract is the way human beings interact. Contracts are the way we do business—contracts are at the heart of human economies.

But, a Christ-centered marriage is a covenant—and, of course, our relationship with God, in and through Christ, is a new covenant.

But when a marriage is based on a Christ-centered relationship, then spouses lay aside their human desire to keep score, and instead serve their mate, without ever expecting a return in kind.

Christ-centered marriages are based on promises, trust, love and grace—so that when one partner stumbles in some way, the other is not quick to condemn and find fault (as is the case with a contract) but quick to forgive and reconcile.

For many people, their relationship with God, as Christ-less religion explains it to them, is basically an assurance, assuming they obey and perform enough good works, that they will not be tortured forever in an eternal hell.

• God doesn’t do contracts—he does covenants. Christianity is a covenant, not a contract.

• To live in the new covenant with God means that you have exchanged lives—Jesus has given you his life, on the cross, and you surrender yours to him, and Jesus then lives his risen life in you, so that, as Paul says in Galatians 2:20, we are crucified with Christ and we no longer live, but Christ lives in us.

• Salvation therefore, is not a contract—it’s not an exchange of your good deeds and good works for God’s blessings and favors.

Salvation is a covenant, a promise—it’s free, because it’s given by God’s generosity which does not depend on human accomplishments. According to the new covenant in Christ, we do not earn or merit God’s love—he gives it to us because of his promises, because of his goodness and because he loves us unconditionally.