It’s Either Old or New – It Can’t Be Both 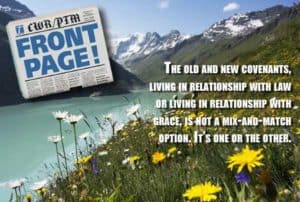 Therefore, as God’s chosen people, holy and dearly loved, clothe yourselves with compassion, kindness, humility, gentleness and patience. Bear with each other and forgive whatever grievances you may have against one another. Forgive as the Lord forgave you. And over all these virtues put on love, which binds them all together in perfect unity. Let the peace of Christ rule in your hearts, since as members of one body you were called to peace. And be thankful. Let the word of Christ dwell in you richly as you teach and admonish one another with all wisdom, and as you sing psalms, hymns and spiritual songs with gratitude in your hearts to God. And whatever you do, whether in word or deed, do it all in the name of the Lord Jesus, giving thanks to God the Father through him. —Colossians 3:12-17

Erma Bombeck communicated the real life that confronts and challenges mothers, wives and homemakers, a life that is far from the idyllic picture many see as presented by the Martha Stewart empire.

Several of the titles of Erma Bombeck’s books tell the story:

In 1971 she published Just Wait Until You Have Children of Your Own. One of her best sellers, The Grass is Always Greener Over the Septic Tank, appeared in 1976. That title was followed by, in 1978, If Life is a Bowl of Cherries, What am I Doing in the Pits?

A generation of North Americans (not only women, but plenty of men, including this one) laughed along with Erma Bombeck when she provided a lighter look at having kids, taking care of a family, providing a home and getting older.

Here are a few samples of Erma Bombeck’s wisdom:
• Never loan your car to anyone to whom you’ve given birth.
• My children usually refused to eat anything they had not first seen dancing on television.
• Insanity is hereditary. You can catch it from your kids.

With our guests in mind, let’s consider Colossians 3:12-17. Paul is telling those of us who are in Christ to clothe ourselves with compassion, kindness, humility, gentleness and patience. As Christ-followers we bear with each other, we forgive, and we “put on” (language that suggests clothing) love.

Putting on Christ, in our passage in Colossians, is a word picture of the new covenant, in which we are freed from any obligations to attempt to earn God’s favor on the basis of our performance. Instead, we are given assurance that Christ has done for us what we can never do for ourselves. We are given, as that great old hymn proclaims, “Blessed Assurance.”

This new clothing is the opposite of the old. The old covenant, the old way of attempting to spiritually clothe ourselves and hide our nakedness was filled with never-ending effort and worry. When we humans live under the law, we attempt to achieve God’s favor by our own struggle to obey, whereas God’s grace presents us with God’s goodness on the basis of our trust.

The new clothing of the new covenant, whereby we are clothed in Christ and his righteousness—does not come from the law, it comes by grace. The new covenant is thus the polar opposite of the old covenant.

Of course, as Christians, we are clothed by the new covenant in Christ’s blood. Therefore, as Christians, we have no required relationship with the law. We have nothing to do with the law. We don’t keep it, we don’t break it. That’s a suit of clothes we don’t wear, and if we completely trust God, we don’t even keep the old clothing of religious legalism hanging in our closet. We will throw those clothes away—or maybe even burn them!

Allow me to use a colorful southern idiom to express the worthlessness of the old covnant–”that dog won’t hunt.”

When we are clothed in and by Christ, we won’t even want to donate our old clothing of religious legalism to the spiritual equivalent of a thrift store. If the law was once our clothing, if we ever were enslaved to the idea that we can make God love us, or love us more, then we don’t want anyone else to have to endure what it means to attempt to relate to God on the basis of laws.

You see, there’s more than one way to be clothed. You can attempt to clothe yourself with your own efforts to become perfect, or you can accept God’s free gift of Jesus Christ, who provides you with a new suit of clothing.

But you know, that is exactly what many people attempt to do today. They are wearing clothing that seems to be Christian, the clothing has tags and labels on it identifying it as Christian, but they haven’t surrendered the old legalistic dirty and soiled underwear they have on.

When you accept Christ, it’s on his terms. That old clothing of religious rules and regulations is obsolete. It’s not “in style” anymore. More than simply being “out of style”—it’s worthless. It truly is like the emperor’s clothes. The legalistic idea that we can earn a relationship with God on the basis of our performance is bankrupt, and preposterous, but it is an idea that hundreds of millions fall for.

Keeping in mind the new clothing we are given, by God’s grace, let’s get back to our guests. Let’s pretend that a fictitious communication between them actually took place. In this discussion, Martha Stewart represents the frenzied efforts of any human to attempt, solely on the basis of effort, to please God. Martha Stewart represents the old clothing of human righteousness.

Dear Erma,
I’m sending you this little note on stationery I made myself. I’ve been busy preparing for a small lunch for 30 of my closest friends. I’m serving them a 15-course meal, and I’m making each course myself, from scratch. Then, after lunch I have to hop on my jet to fly out to Hollywood where I’m speaking to an overflow crowd about Martha Stewart Living.

Erma received the note from Martha Stewart in the mail, and wrote back,

I hope you won’t mind, but the only time I had to write was when I was getting the kids ready for school so the only stationery I could find had peanut butter and jelly on it. One of the kids has a runny nose, the other one can’t find her homework—we really do think the dog ate it. My youngest daughter is upstairs in the bathtub and we only have 10 minutes before I have to drive them all to school. Ooops. I’m going to have to cut this short. I see water running down the stairs. “Someone” who is already late for school must have forgotten to turn off the water to the bathtub.

We all have a human compulsion to regulate our lives so that they are nice and neat—with everything all lined up. All the questions answered. No loose ends. No doubts, no uncertainties. Everything concrete and absolute, lots of dogma, no unseen surprises.

Many people attempt to live their physical and spiritual lives in such a way to give order and completion to all the uncertainties, and in so doing they expend never-ending efforts with the goal of perfection—perfection which they attempt to achieve on the basis of their own efforts.

They believe, and religion does its best to support this idea, that perfection is possible, if we just try harder—if we just do more—if we just work harder.

But human perfection attained by human effort is a pot of gold at the end of the rainbow, isn’t it? It truly is the impossible dream, when seen through human accomplishments.

The Martha Stewart delusion, the unreachable goal of a life of perfection, is like the rabbit that a greyhound chases around the dog track. The greyhound never catches the rabbit.

It’s a life lived as seen through the lens of the law. It’s a life seen through all those basic ingredients of life that we think we can control. But when the rubber hits the road —it’s all an illusion.

Our lives are not under our control. We may have felt like there were times when they were, but the only one who truly is in control of all we see and all that we don’t is our heavenly Father.

God tells us, in so many words, Your relationship with me doesn’t come by trying—it comes by trusting!

Our passage in Colossians, speaking about the Christ-centered clothing given to us by God’s grace, is all about a new nature, a new way of living, a new way of knowing God, and of being known by him.

Paul was specifically talking against the idea of some kind of super-spirituality, some kind of holiness that was humanly produced. Spiritual clothing produced by human effort is transparent. It does not clothe us, it does not hide our nakedness, it does not protect us from the elements, nor does it adorn us.

The clothing that human achievement represents is rooted and grounded in what it means to be human. That kind of spiritual clothing can go no farther than human imperfection will take it.

Paul is talking about a new nature, a new clothing line, if you wish. The clothing that we put on (which is just another metaphor for Jesus Christ living in us) is the genuine article. This is real Christianity, this is authentic relationship with God.

“When you stop trying to manufacture your own spiritual clothing, according to the dictates and regulations of religion and its laws, when you stop trying and start trusting, then I will clothe you with a new self, a new creation, with the clothing of compassion, kindness, humility, gentleness and patience. You will bear with each other, you will forgive each other, you will have peace. And over all of these articles of spiritual clothing, your outer cloak, your overcoat, will be love.”