How God Chooses His Team 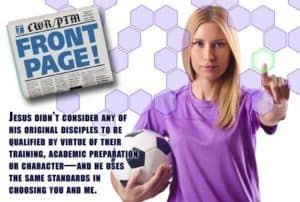 Remember those times when you gathered with a group of your friends and schoolmates to participate in a game that involved two teams? My memories are of two captains who were popularly chosen, or who, by virtue of their size, age and ability (or all three) appointed themselves.

Then the captains started choosing people for their teams. They always chose those who they felt would help them win—that’s logical. Games are all about winning. So when sides were chosen the fastest, strongest, most popular and most athletic were chosen first.

As each person was chosen they walked over and stood next to their captain, until finally there was one last “un-chosen” person standing alone. I always felt sorry for this person—they weren’t actually chosen like everyone else, but instead, they joined the team who had the last chance to choose—they were the only one left so they joined their team by default.

They normally didn’t purposefully stride over to their team—they usually shuffled over to line up next to their captain and teammates, because it was obvious neither team really wanted them. That’s the way life is in our world—Darwin called it the “survival of the fittest.” Survival of the fittest is an appropriate way to describe our world apart from God. Apart from God, it’s a dog-eat-dog, do-unto-others-before-they-do-unto-you world.

The entitled, the rich, the strong, the intelligent and the good looking are chosen first in the kingdoms of this world—but in 1 Corinthians 1:26-29 Paul shares with us some of the criteria God uses in choosing his team. It turns out God is not primarily interested in the contributions we can make to his team, because he doesn’t need our contributions in order to win. The victory has already been won by Jesus Christ. We don’t contribute to the victory, but by God’s grace we share in the victory. Paul says that God chooses his team in the way that he does “so that no one can boast before him” (1 Corinthians 1:29).

In the first chapter of the Gospel of Mark we read about Jesus walking along the Sea of Galilee, and calling Peter and Andrew and James and John from their career of fishing, inviting them to follow him so that he could teach them to fish for men and women.

It’s instructive, particularly when we consider how rabbis selected their disciples in his world, what Jesus did not do in choosing his. He didn’t go to the local seminary on career day to consider hiring, if you like, the best of the best. When he considered his future disciples, religious training and credentials and certificates and commendations were not important for Jesus.

Instead Jesus favored rank and file, rough and ready day laborers and fishermen who were used to getting their hands dirty and had comparatively little formal religious training. Jesus was not primarily interested in the academic achievements of his disciples. He wasn’t looking for the crème de la crème from the top religious seminaries and rabbinical students.

Jesus didn’t consider any of his original disciples to be qualified by virtue of their training, academic preparation or character—and he uses the same standards in choosing you and me. Not one of us can boast before God (1 Corinthians 1:29).

Never forget that you are not qualified for the high honor of being invited to be a Christ follower, rather God has “qualified you to share in the inheritance of his holy people in the kingdom of light” (Colossians 1:12).