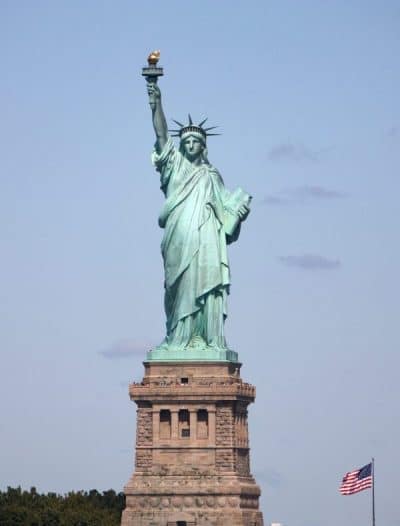 It is for freedom that Christ has set us free. Stand firm, then, and do not let yourselves be burdened again by a yoke of slavery.

Mark my words! I, Paul, tell you that if you let yourselves be circumcised, Christ will be of no value to you at all. Again I declare to every man who lets himself be circumcised that he is obligated to obey the whole law. You who are trying to be justified by law have been alienated from Christ; you have fallen away from grace. But by faith we eagerly await through the Spirit the righteousness for which we hope. For in Christ Jesus neither circumcision nor uncircumcision has any value. The only thing that counts is faith expressing itself through love.—Galatians 5:1-6

The history of humanity is a struggle for freedom. The word freedom, and the idea behind it begs for further explanation. Freedom of what? Freedom from what? What kind of freedom? There are many kinds of freedom.

July 1 is Canada Day, when Canadians celebrate their national freedom as a sovereign nation, and on July 4 the United States does the same. We celebrate that we are free from any foreign power telling us how to live our lives. We celebrate a unique (and it is unique in human history) degree of freedom—guarantees of freedom of speech, freedom of the press, freedom of assembly and freedom of religion. These are truths that we hold to be self-evident.

But of all the freedoms we can have, freedom in Christ should be the most cherished and most prized because it trumps all other freedoms. One can have political and economic freedom but remain enslaved to false religion. One can live in a free country but still be bound in a spiritual prison.

I don’t consider myself to be a religious person. I used to be, but I am now free in Christ, and I am free from religion. I am a Christian, but I am essentially irreligious. I realize that neither of my grandmothers, if they were alive, would be happy to hear me say this, but at least one of my grandfathers would.

My maternal grandfather escaped from what he called the “old country.”

Almost 100 years ago he ran away from the old country of Europe—Germany and the Ukraine—and he didn’t want anything to do with what he left behind. He and his family suffered a great deal at the hands of religion, and he wanted none of it when he settled down in a small town in Kansas. He, and many others, sacrificed everything so that they could live in a country that offered freedom FROM religion.

I learned a similar lesson, but it took me several decades, during which I felt I had discovered the one and only true religion. I was absolutely enslaved to religious legalism and I did my best to convince others that they too needed my unique brand of elitist, narrow, judgmental, hypercritical system of rules and regulations.

After almost 35 years of bondage my eyes were opened through many life experiences, to see the bankruptcy of any religious system that pretends to impart righteousness through strict observance of rules and regulations. I learned that no priest, no religious prescription nor any religious potion could ever make me good enough to convince God, on the basis of my performance, to love me. I left religion behind over 15 years ago, and I have been, by God’s grace, religion-free since that time.

Of course there are times when I revert to previous form, when I default to human thinking, which is the false premise that I can do all that needs to be done to convince God that I am qualified to gain entrance into his kingdom of heaven on the basis of my deeds.

I have met so many others who have had similar experiences—one person summed up why she would never fall for the legalisms of religion again. She said, in effect, “I spent most of my life trying to convince God to love me on the basis of what I did for him. God’s grace finally got through my thick head that nothing I could ever do or produce was good enough to earn me a nano-second in God’s kingdom of heaven—and it was then that I embraced Jesus, and I kissed religion good-bye.”

When people ask me if I am religious, I know what they usually have in mind, so I often use the opportunity to tell them that I dislike some of the very things that they might dislike about religion! I tell them that I am an irreligious Christian.

It’s a great way to introduce and talk about freedom in Christ, which is a topic that Christ-less religion avoids like the plague. Legalistic religion, even religion that thinks it is serving Jesus Christ, even religion that might have the word grace as a part of the name of a church, is filled with bad news, not good news.

As we celebrate our national freedom we can also celebrate our freedom from the accumulated traditions, the unbiblical, non-biblical and extra-biblical pronouncements that have taken on a life of their own, and hold people in religious bondage.

Being free in Christ means that no one can tell you that you must pray a certain number of times each day or a certain length of time.

Being free in Christ means that if you want to take a drink of wine or beer, in moderation, then you can do so. Of course the Bible is clear that intoxication is a sin. But no religion has the power or the right to tell you that you must avoid all alcohol.

Being free in Christ means that as a Christian you are part of the body of Christ. If you also choose to be a member of a denomination and/or a local congregation, your affiliation with an earthly incorporated legal entity that calls itself a church does not mean that it defines or determines your relationship with God.

Being free in Christ means that you realize that the amount of water used in baptizing someone is not the final factor that determines whether they are a Christian or not. Beyond that, you realize if you are free in Christ, that no church has the right to tell you that you must be baptized by them, by their ministers, into their doctrinal beliefs and worship patterns, before God will accept you.

Being free in Christ means that you come to realize that Christianity knows no denominational boundaries and that Christianity flows over, in, between and around the concrete walls and blocks of a building that calls itself a church. There may be Christians who are part of your church, but your church does not encompass all of Christianity.

Being free in Christ means that you come to realize that authentic Christianity is usually the polar opposite of religious observance.

Being free in Christ also helps us to realize that we are not free to live our lives in any manner we might choose, for if we accept Christ, and the freedom from religion he offers, we will follow him. He will be both Savior and Lord of our lives. We will obey him, but that is an entirely different life than being enslaved to a religious system (even denominations and churches that may call themselves Christian).

In our passage Paul was talking about a specific context, about the Jewish law which these Christians had become convinced they must observe. The principle holds true to any kind of religious law or religious methodology that exalts itself above Jesus Christ.

Paul is talking, throughout the book of Galatians, about slavery to the law. He tells us that if we are convinced that the only way we can please and appease God is through our careful adherence to a system of rules and regulations we will be under a curse.

We will be cursed because we will forever be unable to determine whether God is happy with us. If you ask a person who is a slave to legalistic religion whether or not they know that God has saved them or whether they will be allowed to enter God’s kingdom of heaven when they die, their answers will be something like: “I hope so.” “I can’t be sure, it would be self-righteous to say I know for sure, but if I can keep up doing what I’m doing, I’ll probably make it.” “No one can ever know for sure, that’s why we just have to keep on doing our best until the day we die.”

That’s why Paul says, in those beautiful and powerful words in verse one of our passage, It is for freedom that Christ has set us free.

He hasn’t set us free so that our lives can be spent on a hamster wheel, forever going faster and faster, trying to do more and more, so that one day, hopefully the same day we die (or shortly before) God will be forced to admit that we have finally made the grade and thus he will reluctantly admit that we “made it” and “qualified.”

You may remember that great, classic movie called The Great Escape—with Steve McQueen and many others. Allied soldiers were prisoners of war in a Nazi prison camp, a special place reserved for prisoners of war who had escaped from another prison. The movie shows how a number of them did escape again.

None of those who escaped would ever have considered returning, voluntarily, so that they could knock on the door of the commandant, and say, “Excuse me, but I don’t think I served my time. I need to be readmitted, so you can beat me, torture me and do anything you want with me. I was free, but I don’t deserve to be free.”

Amazingly, that very thing happens within Christendom and that very thing is part of the context Paul is discussing here in Galatians 5. When that happens, as Paul says in verse four of our passage, one falls away from grace.

When you are convinced that you are a slave, you will accept any and all help to be rescued. And once you are saved from slavery, your gratitude will know no ends, you will forever be thankful. And, above all, you will never go back.

I believe that Christ has set me free from Christ-less religion so that I might be free to serve him, and him alone.

During this time when we celebrate our national and political freedom, may we never forget that of all the freedoms we can have, freedom in Christ is the most precious and cherished. One can have political and economic freedom, but remain enslaved to false religion—one can live in a free country but still be bound in a spiritual prison.