God’s Grace is For Everyone 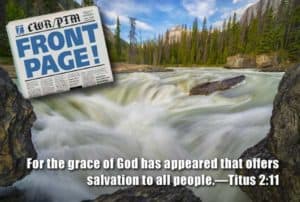 For the grace of God has appeared that offers salvation to all people.—Titus 2:11

You are invited to the kingdom of heaven, and the invitation is called “the gospel” (good news) because it has no strings attached. You and I are invited to the kingdom of heaven in spite of what we have done! The body of Christ on earth is not the equivalent of an exclusive country club or a cloistered, highly restricted religious fraternity or union. Titus 2:11 says that God’s grace is available to everyone—it does not promise or insist that everyone receives and accepts it —but grace is available, and it’s for everyone.

There’s a story I once heard that may help to illustrate how God’s grace is for everyone, but not necessarily accepted by everyone. About 100 years ago, when Christianity and the Bible were very much a part of the curriculum of schools, the students at an exclusive, private school showed up for the final examination in their fundamentals of Christianity class.

Some of them were bleary-eyed, having studied all night in an effort to get a good grade. On the other hand, some of the students looked as if they not only were well-rested, they didn’t seem to have a “care in this world”—they didn’t seem worried about this test.

After all the students were seated the instructor finally entered the room and he slowly made his way around the room, placing the final test face down on the desk of every one of the 40 students in the class. As he passed out the tests he told the students not to turn the test over and begin until everyone was ready. After he had passed out all the tests, he stood at the front of the room and instructed everyone to turn the test over and look at the first page.

The instructor told them that he had taken the test for them. He told them that their preparation and study did not earn them this “A” because he wanted to give them a final lesson about the grace of God. Therefore, they each received an “A” that they did not earn, and they were all free to leave the room with that “A.”

But then an amazing thing happened (actually, not so amazing if you realize how God’s grace is rejected by the human heart). Some of the students actually refused to accept this gracious “A.” Those who had studied long and hard gathered around the professor, arguing that those who didn’t seem to have studied as hard did not deserve the same grade. Those who had diligently studied long and hard were not content with an “A” if everyone was going to receive an “A.” They wanted extra credit—they wanted their efforts to be recognized by the professor. The ones who had worked long and hard wanted, and in fact demanded, an “A+”!

If you remember the parable of the workers in Matthew 20, you’re way ahead of me. The scene that resulted after the final exam was predictable, and knowing exactly what would happen, the professor planned this extra lesson about the fundamental building block of Christianity for the angry students who wanted more and wanted their efforts to be rewarded. The students reacted just like the workers in Jesus’ parable.

The professor told his students that it was his right to assign grades—and that those who felt they had worked longer and harder than others would receive an “A” just as everyone else had—for that is the way God chooses to offer his grace. God’s Grace Is for Everyone.

The professor asked the angry students if they were upset because their fellow students, who hadn’t seemed to have worked as hard, were also going to receive an “A.” Some admitted they were—and some of them actually threw their paper to the floor—with the “A” they had received by grace—and stormed out of the room. They refused the grace offered to them.

God’s Grace Is for Everyone.
I was reading a book titled Traveling Mercies by Anne Lamott. She related a story of a man named Ken who was dying of AIDS and started to attend her church. Week after week it was easy to see that Ken was slowly dying.

A charming, vivacious and outgoing African-American woman named Ranola was a leading member of the church. Ranola sang in the choir, and being raised in the South in a strict Baptist family, Ranola believed that Ken’s previous behavior resulted in him having AIDS. Ranola couldn’t bring herself to talk to Ken. She kept her distance. Anne Lamott says that Ranola might have even been afraid that she would catch AIDS if she got too close to Ken.

Then, one Sunday morning the congregation was singing “His Eye Is on the Sparrow.” Ken was too weak to stand. Ranola, singing in the choir, kept watching Ken and then, moved by the message of God’s love and acceptance she was singing, and the sight of Ken, too weak to even stand, Ranola left her place in the choir. Ranola was moved by the words she was singing, and the obvious incongruity with her own attitudes toward Ken and others like him.

Tears were streaming down her face when Ranola walked over to Ken, picked him up, effortlessly, like a little white rag doll. Then Ranola started to sing again, holding Ken next to her, “His eye is on the sparrow and I know he watches me.”

True stories, like the one about Ken and Ranola, related by Anne Lamott, help us to see ourselves and to see Jesus. Such stories help us understand the heart of God, and the nature of his open, inclusive invitation—God’s Grace Is for Everyone. Thank God for his grace as you give that further thought.