I Am Alive For Ever and Ever! 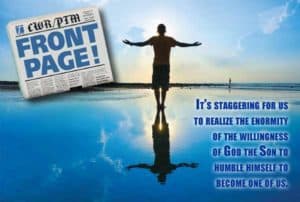 When I saw him, I fell at his feet as though dead. Then he placed his right hand on me and said: “Do not be afraid. I am the First and the Last. I am the Living One; I was dead, and now look, I Am Alive for Ever and Ever! And I hold the keys of death and Hades.”—Revelation 1:17-18

You know, almost every time that God came to someone in the Bible to tell them he wanted them to fulfill a certain responsibility, he received a similar response. Moses said he wasn’t fit for the job because he had a speech impediment. Jonah of course ran away in the opposite direction. When Peter became more aware that Jesus was God in the flesh he told Jesus to get away—because Peter knew that he was a sinful man.

I absolutely relate to such stories. I know that we humans generally feel fearful and intimidated when God seems to be telling us what he has in store for us and virtually all of us have the same reaction: “God, I’m not qualified. You must have the wrong person. I don’t think I have what it takes to fulfill what you have in mind.” In reply, God could easily say, “You don’t think I know about your lack of qualifications?”

But in many cases we read about in the Bible, when God does respond to the fainthearted, he says, “Don’t be afraid.” God said it to Abraham when he made a covenant with him. Mary, an unmarried teenager, was impregnated by the Holy Spirit and was told by the angel Gabriel, “Don’t be afraid.” Over and over again Jesus told the disciples—”Don’t be afraid.” In our keynote passage (Revelation 1:17-18) I Am Alive for Ever and Ever is the comforting reassurance Jesus gave to John.

In the first 11 verses of this first chapter of Revelation, John provides an introduction to the book. Then in verse 12 he describes the vision he saw of the resurrected, glorified Jesus Christ. The vision was so overwhelming—the personage and presence of the risen Lord was so powerful—that John fell as though he was dead. Did he fall down because he was worshiping Jesus? No, he fell down, as though he was dead, because he was paralyzed with fear! Jesus Christ placed his right hand on him, touching him and comforting him, assuring John, “Do not be afraid…I Am Alive for Ever and Ever.”

It’s not as if John did not know Jesus—John was standing at the foot of the cross when Jesus died. After the resurrection John was in a room with the other disciples when Jesus suddenly appeared to them all, but at that time Jesus looked like he had before he was crucified and resurrected. John saw him on other occasions after his resurrection—and along with the other disciples he saw the resurrected Christ ascend into heaven.

So this vision of the glorified Christ was not a vision of a powerful being who John did not know. And even though John had personally known Jesus he was still paralyzed with fear!

Why didn’t Jesus just appear in this vision without all his heavenly glory—after all, doesn’t it seem that if he had appeared to John as John had known him, then he wouldn’t have scared John to death? Sometimes we can get so familiar with Jesus, as he came to us in the flesh, as he willingly subjected himself to be one of us, that we think of him somewhat like a friendly, compassionate teddy bear. And while Jesus wants us to think of him and know him as a friend, there is more to Jesus than just a cuddly teddy bear.

As the God-man, Jesus was uniquely the one and only Son (John 1:14, 18) who was both human and divine. It’s staggering for us to realize the enormity of the willingness of God the Son to humble himself to become one of us. It astounds us when we try to wrap our minds around the Creator of the universe voluntarily becoming an embryo in Mary’s womb.

The Eternal Son of God became the product of conception, when God the Holy Spirit overshadowed Mary and she, as a virgin, miraculously conceived. He became an embryo, and then eight weeks after his conception, he became a fetus—the process all human beings undergo as we are prepared for human birth.

After nine months Jesus was born as a helpless baby who needed to nurse at Mary’s breast, and whose diapers needed to be changed. The incarnation of God in the flesh was an incredible miracle—and an incredible act of love on the part of God, who would stoop to become what we are. Out of his love for us God, in Jesus, willingly went through all that it takes to be and become a human being. Because of his love for you and me, Jesus didn’t exempt himself from any part of the process of being and becoming a human!

John probably didn’t fully appreciate the miracle of God becoming flesh—the magnitude and implications of God, in Christ, coming to be one of us—until much later in his life. Like most of us, John first came to know and listen to the teachings of the fully-grown adult Jesus, who was his teacher and his master. As his disciple John saw the love and compassion of Jesus—he saw Jesus reach out and touch the lives of so many—he saw a Jesus who was more interested in serving others than being served.

It probably wasn’t until later that John came to grapple with the fullness of who Jesus really was—the very Creator of all that can be seen as well as the unseen. And then John witnessed the death of Jesus. Of course, for those original disciples, even though Jesus had told them over and over again that he would willingly die for them—even though Jesus told them that the greatest love that anyone can ever experience is for someone to die for them—even though they had heard the words that Jesus had said about the love he would express in his sacrifice on the cross—they were still disappointed and downcast when he was crucified.

To some degree the disciples couldn’t help but think that the cross of Christ meant that Jesus was a failure— after all, if he was as powerful as they thought, then why did he let himself be crucified? And then—another miracle—the resurrection from the dead! They must have considered some, if not all of these paradoxes: just as human beings are not born to virgins, just as God does not become flesh, just as God in the flesh doesn’t let himself be crucified, so too are humans not resurrected from the dead.

With all of that said, now Jesus was giving John this further revelation—which became the book we know as the book of Revelation. To make sure that John fully appreciated that Jesus had not only been the God-man, and that he was eternally God, as he had always been—Jesus let him see, in vision, a taste of his glory—a glimpse of how the human eye would perceive the glory of God.

Of course, no human could actually see God as he is and live, for the glory of God would not simply scare us to death but the sheer power and radiance of his glory would terminate our life. John says that the face of the glorified Son of God, which he saw in this vision, was like the sun shining in all its brilliance. Again, here’s the reassuring message Jesus gave to John, and to all of us—I Am Alive for Ever and Ever!

We could no more live if we saw and experienced the presence of the glory of God than we could continue living if our earth moved much closer to the sun. So John didn’t actually see the glory of the glorified, resurrected Jesus—he saw a vision of it, and that vision scared him to death!

But again, while John needed to be impressed with the overwhelming majesty and supremacy of God, Jesus did not leave him overwhelmed. Jesus came over and touched John, and comforted him, telling him “Do not be afraid… I Am Alive for Ever and Ever.”

How did Jesus impress on John the power, strength, energy, ability and capacity of God, while also impressing on him the willingness of God to reach down and touch us, love us and be with us? Jesus begins with this brief self-portrait by using the two words “I am.” When we hear “I am” with John we hear the echoes of what God said to Moses in the burning bush: “I AM WHO I AM” (Exodus 3:14).

“I am” also causes us to hear the echoes of the teaching ministry of Jesus, who, when he walked this earth gave us seven different ways in which he was and is the great “I Am.” Of course as he saw this vision John would have immediately remembered “I Am” for the Gospel God inspired him to write records the seven I Am statements:

What does this mean for you and me? The take away from this message is this: no matter what may happen to you in this New Year, whether it is a formidable challenge you already see on the horizon, whether it is a continuing trial of your health or finances, or whether this New Year holds unexpected hardships and adversities, you need not be afraid.

This same Jesus, who came to be one of us, who out of his love for us died on his cross, who rose victoriously from his tomb, and who is, in his glory, all powerful and omnipotent, is the one who reaches down, comforts us and assures us “Do not be afraid.”

We need not be afraid because Jesus is not going anywhere—he is the same yesterday, today and forever—and he will always be with us. He Is Alive for Ever and Ever. Don’t be afraid!