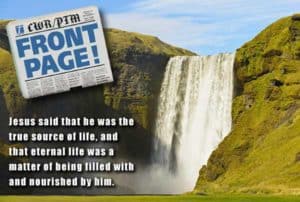 Earlier this year my wife and I attended memorial services for the wife of an older gentleman who frequents the same gym where my wife and I exercise. Jerrat is one of a number of seniors who arrive early at the gym, virtually every day. We have joined this group about three times a week over the last 6-8 years.

A group of about 20 of us from the gym (we call ourselves gym rats) joined Jerrat, his family, loved ones and friends, supporting them during this time of loss. A week or so after the funeral my wife Karen decided to make some dinner for Jerrat. We called him and asked him if we could come to his house and bring him dinner. He was so thankful as Karen continued to make him meals, on a regular basis, during those early months when he was grieving the loss of his wife.

During those first few months after his wife’s passing, when we arrived at Jerrat’s front door with another home cooked meal, I started to jokingly tell him that we were “Meals on Wheels.” Our experience and my identification of our efforts as “Meals on Wheels” inspired me to research this wonderful community outreach. I discovered that “Meals on Wheels” is the oldest and largest nutritional program operated within the United States, and that a veritable army of volunteers (somewhere between 800,000 and 1.5 million people) are needed to deliver meals to senior citizens.

Jerrat’s genuine thanks-giving for these meals prepared by Karen caused me to think a little bit more about Thanksgiving. Thanksgiving is a time when our thoughts turn to food—planning a menu, shopping, preparing and consuming a Thanksgiving feast—in fact God has created us so that our thoughts never really venture too far away from food. Hunger is a constant reminder to each of us of our dependence on God. God created us so that we would constantly need to be replenished with food and water.

What Jesus eats, when he eats, where he eats and with whom he eats fill many pages in the four Gospels. Many of the important events in Jesus’ life take place around a table. He was hosted at banquets, he fed large crowds and he performed his first miracle at a wedding feast. He gave parables about banquets and about eating—he talked about bread and water as spiritual symbols.

Jesus pronounced those who hungered and thirsted after righteousness as blessed. His own last supper with his disciples was more about the spiritual implications of who he was and how essential he was to their spiritual lives than the physical elements of the food in front of them.

While they were eating, Jesus took bread, and when he had given thanks, he broke it and gave it to his disciples, saying, “Take and eat; this is my body.” Then he took a cup, and when he had given thanks, he gave it to them, saying, “Drink from it, all of you. This is my blood of the new covenant, which is poured out for many for the forgiveness of sins”—Matthew 26:26-28

The very last scene in the Gospel of John is another meal—by the side of the Sea of Galilee. The disciples had fished all night, they were tired and their stomachs were empty. When they came ashore they saw that Jesus had cooked a barbecue meal of fish and bread over charcoal. Jesus said to them, just as he invites you and me, “Come and have breakfast” (John 21:12).

In the sixth chapter of John we read of Jesus miraculously feeding a crowd of five thousand—he fed them with bread and fish. In the rest of the chapter Jesus continues to talk about bread. In Jesus’ day the word bread was such a foundational ingredient in daily diets that it became synonymous with food. But, in this sixth chapter of John Jesus changes the conversation from physical bread to spiritual bread.

This statement of course was an obvious reference to spiritual nourishment. Jesus himself, after doing without food for 40 days and 40 nights cited this same passage to the devil, who tried to tempt Jesus with physical food. “Man does not live by bread alone” (Matthew 4:4).
The food God miraculously provided for the Israelites in the wilderness was mysterious, for it appeared out of nowhere. Manna was mysterious in the sense that the nation of Israel had never eaten of it before. Manna was provided because the food the Israelites had eaten in Egypt, and were accustomed to, was not available. Among other things, the exodus from Egypt changed their eating habits. Their normal methods of obtaining food and consuming food—and thereby remaining alive—had completely changed.

Looking back in hindsight on what manna was and how God provided it, we realize that before manna the Israelites were used to deriving their food from crops and animals. They raised their animals, they tilled the ground for food in their gardens—they were used to working to feed themselves. The lesson of manna is that when God enters our lives, so too does his principle and methodology of grace. Just as manna was something the Israelites knew nothing about, so too do those who have only known of God as demanding obedience to laws know little, if anything, of God’s grace. God’s grace is mysterious!

Having been given their freedom from Egyptian oppression, the nation of Israel was now living a nomadic life, and they were living that life in the desert—so that even if they stayed in one place long enough to grow a crop, the barren conditions meant that no crop would grow. Left to themselves and their own abilities to feed themselves they realized they would surely starve to death. They knew that no amount of ingenuity or hard work on their part could raise enough in the way of crops to feed themselves. They did know that even though they were slaves in Egypt, they could depend on their Egyptian masters for food.

Think about it. If you suddenly found yourself in need of food, you would look first to the familiar places where you normally buy food. In this new place where you suddenly found yourself, you might first start looking for an outlet from your favorite grocery store chain. You might start looking for your favorite fast food outlet. But of course there were no grocery stores, pizza places or burger joints in the wilderness.

Had they lived in the spiritual Egypt of the United States, but now transported to the wilderness, the Israelites would discover no Safeways, Albertsons, Wal-Marts, Winn-Dixie’s or Krogers. If there were Canadians among the Israelites in the wilderness, they would have looked for A&P, IGA, No Frills, Loblaws, Price Chopper or Food Basics. And if there were folks from the United Kingdom wandering around in the wilderness looking for food, they would have looked in vain for Tesco, Sainsbury or Waitrose.

God gave the Israelites manna—a food they couldn’t grow, shop for, produce or purchase. It was free because it was from God—by his grace. Manna was meals on invisible wheels. At the end the sixth chapter of John, Jesus, reiterating that he was the bread of life, said that he was the true source of life, and that eternal life was a matter of being filled with and nourished by him.

One of the challenges we have in our 21st century is that there are many suppliers, wholesalers, shops, markets, outlets and stores that offer us spiritual food. Just as there are many grocery stores, so too are there fast food franchises—there are restaurants of all sizes, shapes and varieties, along with the traditional sidewalk vendors selling hot dogs, pretzels, water and sodas and coffee out of a sidewalk food cart.

Just as physical sources of food have multiplied, so too have spiritual sources of food multiplied—until now, in our 21st century, most of us who live in cities have a bewildering number of choices as to what, where, when and how we will eat—both physical food and spiritual food. One of the huge problems with our spiritual diet today is that there is a great deal of spiritual junk food out there and much of it will make us spiritually ill. Spiritual junk food may seem to fill us up and temporarily quench our hunger and thirst, but it’s a cheap counterfeit. Much spiritual food that is offered and sold today is missing one key ingredient— Jesus is not present. And, as the sixth chapter of the Gospel of John proclaims, Jesus himself is the true Bread of life.

Come, all you who are thirsty, come to the waters; and you who have no money, come, buy and eat! Come, buy wine and milk without money and without cost. Why spend money on what is not bread, and your labor on what does not satisfy? Listen, listen to me, and eat what is good, and you will delight in the richest of fare.—Isaiah 55:1-2