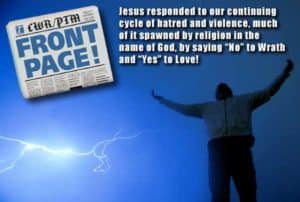 For I resolved to know nothing while I was with you except Jesus Christ and him crucified.—1 Corinthians 2:2

Many, if not most, Christians when they are asked, “Why did Jesus die on the cross?” will give an answer something like this:
To die for our sins. This of course, as far as it goes, is a biblical answer.

But the answer doesn’t end there. Most Christians will continue to explain why Jesus died on the cross by parroting back phrases they have been taught, such as:

So a more complete answer many give often sounds something like this:

So many, if not most, Christians start with the simple biblically based answer, Jesus died for our sins, and then add many additional ideas and thoughts that are far more religious in origin than they are biblical. For instance, many have been taught that the “wrath of God” was the reason why the cross was necessary. God was angry and upset— someone had to pay for the evil of sin.

This idea or theory is called (excuse the academic sounding terminology) the penal substitutionary theory of the cross of Christ.

Let’s break that down:

• Penal—penal is of course the root word of penalty. You may be familiar with the word “penal” as it is often used in conjunction with time an inmate must serve, to pay for his or her sins, in a penal colony or prison. Penal has to do with justice being served, either in a place of confinement or by a specific act—a penalty paid commensurate with the crime committed. Another place you frequently hear the word “penal” is in the phrase “penal code.”

• Substitute—that’s a little easier. A substitute is something or someone who takes someone else’s place. In terms of our discussion, it has to do with a sinner who deserves a penal-ty, but Jesus substitutes and pays the penal-ty. So we have the penal substitutionary theory as to the significance of the cross of Christ.

But the penal substitutionary theory of the cross of Christ introduces some questions:

First question or problem: The penal substitution theory pits God the Father against God the Son—a bad cop against a good cop, if you like. But many Scriptures affirm that the one God is Father, Son and Holy Spirit, in complete unity and harmony.

2) The theory of penal substitution explains that while God is one, because he loves us, he put himself under his own law. Jesus died on the cross because God the Father could not let sin go unpunished. Because he didn’t want to send us to hell, he paid the penalty himself.

Second question and dilemma: Is God actually a God who seems to need to see justice paid for in the way we humans need justice? Are we assuming God is more like us than he actually is? The Bible speaks of a God who does not need or demand payback or vengeance—indeed, Jesus overturned the idea of an eye-for-an-eye and a tooth-for-a-tooth.

Beyond that, by definition, the God of the Bible is not beholden to anything—if God must do something, then the something God must do is greater than God. God is not God if he must obey his own law.

3) The very term penal substitution invites us to think of God the Father as the judge in a courtroom, a hanging judge who is sworn to uphold the law. The picture is that when we appear in the Father’s courtroom we are doomed —but Jesus, who is also God, as our advocate, stands up and volunteers to take our place.

The Bible does not exclusively define God as law or God as judge. Yes, the Bible speaks of him as a judge, and it certainly explains his law. But that is not the primary revelation of God. The primary definition of God in the Bible is love. Love, according to the Bible, is not merely one of God’s attributes—love is God’s core spiritual DNA. God does not have love—God is love. So to merely think of God the Father as a hanging judge in the courtroom is to seriously damage our understanding of the nature of God and the relationship he offers to us.

4) The theory of penal substitution explains that God is so holy and so pure that sin outrages him. Sin offends him. His sense of honor and holiness is offended, so God’s wrath needs to be satisfied.

Fourth question and dilemma: So we worship a God who needs to be satisfied—a God who cannot rest until he is vindicated? How does this idea align with the teachings of Jesus when he speaks of God who endlessly forgives?

How, in short, is a God who needs to be satisfied the same as the God of grace? Is the God of the Bible a God of retribution? A god who demands the child-sacrifice of his own son to satisfy his wrath is more like a primitive pagan god than the God of love of the Bible.

According to the Bible God came to us, in the person of Jesus, the Son of God, with good news of his love. We humans responded to this love with violence—we killed the one who came to reveal the fullness of the love of God. Ironically, the violence humans unleashed on Jesus turned out to be our salvation. Rather than responding to our violence with retaliation—rather than killing those immediate humans who were carrying out his torturous death—Jesus responded by saying, “Father, forgive them.”

Jesus turned the other cheek. He accepted, received and absorbed the wrath of humanity and returned love and forgiveness. Notice that! Whose wrath was poured out on Jesus? Human wrath! Humanity—specifically at that time Roman soldiers and the religious leaders behind their actions—killed Jesus.

The cross itself then becomes a symbol for a way of life. When we fully accept Jesus as our Lord and Savior, he saves us from a life of violence and death, transforming us into a new life. He saves us from our sins of violence, hatred, religious pride, animosity and lust—and then lives his life of love and forgiveness within us. In fact, he tells us, as his followers, to pick up our respective crosses and follow him. As a Christ-follower we are called to a life of suffering, for we renounce violence, we are empowered by God to overcome a life of death-dealing hatred and instead return good for evil.

The primary way of understanding the cross of Christ within Christendom today is that God needed the violence and bloodshed of the cross so that his wrath would be satisfied! But the truth of the gospel is that the wrath and violence came from humans who rejected God’s love and grace —and, turning what seemed to be defeat into victory, Jesus absorbed and accepted the torture and violence and transformed it with the singularly greatest act of love of all time.

So instead of thinking of what God was doing on the cross as his way of satisfying his law and his justice, we need to realize that Jesus was healing us. Indeed, we are told we are healed by his stripes. Jesus was taking our wrath, taking our evil, and transforming it, by grace, into the love of God. The cross of Christ says “No” to Wrath and “Yes” to Love! It is the way out of the human dilemma of violence, hatred and warfare—the ever-escalating, unending cycle of retributive violence when we seek justice by repaying an eye-for-an-eye and a tooth-for-a-tooth.

Truly, repaying an eye for an eye merely continues spiritual blindness and death. It is a perversion and distortion of God’s divine nature to assume that he must be “satisfied” by vengeance and retaliation. Wrath describes the hostility of mortal human beings toward God’s grace—the cross of Christ says “No” to Wrath and “Yes” to Love!

Jesus did not sentence anyone to a hell of eternal torture while he was dying on the cross. He did not threaten those who were beating and torturing him with payback— he didn’t tell them that one day they would pay for what they were doing. Jesus forgave not just those who were physically present—but all humanity for all time. God the Father was not punishing Jesus, God the Son, on the cross. Rather, in an act of sacrificial love, a love that cost him everything, God saved us from ourselves, from our violence and hatred, from our religion, from our spiritual captivity, from meaningless lives of death—and, returning good for our evil, offered us his love, his forgiveness and his grace.

The cross of Christ was a non-violent atonement for our sins, not a penal substitution.
The cross of Christ is the singularly greatest act of love of all time, when God accepted all our wrath, and transformed it, by his love and grace, offering us life.

We can see why Paul said that he resolved to know nothing except Jesus Christ and him crucified. Correctly understood through the lens of God’s love, the cross of Christ is the very foundation of the good news of the gospel!