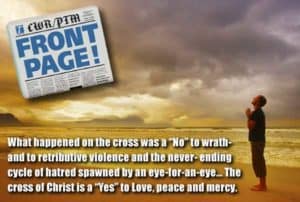 “You have heard that it was said, ‘Eye for eye, and tooth for tooth.’ But I tell you, do not resist an evil person. If anyone slaps you on the right cheek, turn to them the other cheek also. And if anyone wants to sue you and take your shirt, hand over your coat as well. If anyone forces you to go one mile, go with them two miles. Give to the one who asks you, and do not turn away from the one who wants to borrow from you. You have heard that it was said, ‘Love your neighbor and hate your enemy.’ But I tell you, love your enemies and pray for those who persecute you, that you may be children of your Father in heaven. He causes his sun to rise on the evil and the good, and sends rain on the righteous and the unrighteous.”—Matthew 5:38-45

The first thing we must note after reading this passage is that such behavior is humanly impossible. No mere mortal can perfectly behave as Jesus was teaching—but that is just his point! In the face of the overbearing legalism of his day, Jesus was saying that religious demands to become righteous and attempts to produce righteousness fell far short of the goal of perfection. In this part of the Sermon on the Mount he responded to performance-based religion, and effectively said: “OK—you want to be righteous? Then here’s what you will need to do.”

This radical and extreme, humanly impossible to produce standard of righteousness he proclaimed is his way of explaining that authentic Christianity can only be given to mere mortals through the new life God grants us, by his grace. This impossible-for-humans-to-produce righteousness is produced in and through us when the risen Lord Jesus lives within us. Having said that, as we read this passage it’s obvious that Jesus is teaching us that those who are his followers, those in whom he lives his risen life, those who are transformed from sin and death to love and life, will not seek retribution.

As God in the flesh, he is revealing the mind of God. Paul later said, in Philippians 2:5, that the mind of Christ would be our mind, that his attitude would be ours. Yet, when it comes to the foundation of our faith—the singular act that demonstrates God’s love to us and the invitation to an eternal loving relationship—all Christendom at large can tell us is that God crucified his Son in payment for sin. The vast majority of Christendom would have its followers believe that the Father was so offended by our sin that his Son had to die to appease and placate the wrath of the Father, so that the Father would not send us all to be eternally tortured in hell.

Are we expected to believe that this is the love of God the Father? This sounds more like pagan child sacrifice than it does the teachings of Jesus, who came to reveal the Father. Christ-less religion is effectively teaching that God has a psychological need that can only be fulfilled by violence.

Real, authentic Christianity has to be without religion because, amazing as it may be to recognize and accept, religion and government are both founded on the same premise of violence. When we carefully read the teachings of Jesus contained in the

Four Gospels we must come to the final conclusion that Jesus is truly ir-religious. His kingdom is neither of this world’s governments and political systems nor is it of our world religions.

Therefore, the most dominant image of God within Christ-less religion today is of a vindictive judge of retribution. Here’s a response to that logic, which seems, on the surface, to be a reasonable explanation for the cross of Christ. I’m quoting from a book titled Unspoken Sermons —Volume 3, “Righteousness,” written by George MacDonald, whose writings heavily influenced the highly esteemed Christian author, C.S. Lewis:

They say first, God must punish the sinner, for justice requires it; then they say he does not punish the sinner, but punishes a perfectly righteous man instead, attributes his righteousness to the sinner, and so continues just. Was there ever such a confusion, such an inversion of right and wrong! Justice could not treat a righteous man as unrighteous; neither, if justice required the punishment of sin, could justice let the sinner go unpunished. To lay the pain upon the righteous in the name of justice is simply monstrous. No wonder unbelief is rampant. Believe in Moloch if you will, but call him Moloch, not Justice. Be sure that the thing God gives, the righteousness that is of God, is a real thing, and not a contemptible legalism.

If my grandson decides to retaliate he will feel justified and vindicated because his sister ate his apple and justice must be done. A cycle of violence begins. It’s the old eye-for-an-eye idea of retributive justice. And this idea is the very idea many theologians, authors and pastors say that God needs in order for divine justice to be served.

As we read the Bible from a Christ-centered perspective, we find that Jesus reveals God to us as love. God is love—that is the core of the gospel. Because of God’s love and grace, he freely, for no reason that the mortal mind or heart can fathom, extends an invitation into his eternal kingdom of heaven.

• We do not earn his kingdom by our religious performance.
• We do not earn our way out of the eternal, flaming fires of hell—at least the hell that has been invented and fabricated by religion—by our performance.
• Whatever heaven or hell are—and will be—our involvement and presence (and lack thereof in the case of some kind of judgment represented by the word “hell”) is all based on God’s love and grace.
• Any suggestion—any minimizing—any watering down of the key and fundamental proposition of the gospel as the unmerited love and grace of God—is a corruption of the gospel, and for that matter, a perversion of the very nature of God.

Justice cannot be arrived at simply by God (or better stated, by deluded, self-appointed religious professionals) shipping people off to eternal torture in hell. Hell (whatever it may be, however long it may last, however hot it may be) doesn’t bring peace. The fabricated hell of Christ-less religion doesn’t reconcile nor does it heal the wounds of sin.

As I have often said, this very topic is one of the reasons I try to avoid using the word “saved”—as a description for the free gift God offers, by grace, through the cross of Christ. It is true that the Bible uses the term “saved”— but it is equally true that the biblical term does not carry the added baggage that parts of Christendom have attached to the idea of being saved—or, even worse, as some people talk about it, “getting” saved.

From what, exactly, are we saved? We start with a biblical definition—from our sins. But then the concept gets a little cloudy. Many people add that we are saved from the torture of hell God would have inflicted on us, punishing us for our sins—but, they say, Jesus “took our place”— meaning that he endured the wrath of God instead of us.

Jesus saved us from sin. But what is sin? Some people quote 1 John 3:4, saying it’s the transgression of God’s law. And then that discussion breaks down in attempts to precisely define and identify God’s law, as he presumably requires us to obey and keep it. But sin is deeper than actions or behaviors—sin has to do with the fundamental disposition of the human heart. Paul says that our fundamental nature is antagonism toward God. We are the ones who are filled with wrath. We are the angry ones. We want God to leave us alone. Sin is, among other things, our religious disposition to produce our own righteousness, because we are, by our natures, opposed to the righteousness of God, by faith, through Christ.

If and when we feel the need to be righteous, we are inclined to achieve righteousness on our own terms. We want to be able to become righteous by doing something religious. We are, by nature, opposed to the idea that we need God—we are offended by the idea that God can do something for us that we cannot do for ourselves.

The idea of a penal substitution on the cross is actually a case of mortal human beings making the immortal God into an image of ourselves—bringing him down to our level. The teaching of penal substitution, that God was upset and Jesus had to bear his wrath so humans could be saved, is attractive and comfortable to the human mind. We naturally desire, and even crave, to see wrong-doers punished. We want to see people get what’s coming to them. The thought of a really sinful person burning in hell, forever, being eternally tortured, is an emotionally satisfying idea.

Do you remember seeing movies or photographs of hangings and executions? In many cases the hanging or beheading was a festive, communal event—the whole town and the countryside gathered to see “justice” done. But are we justified in transferring to God what seems to us to be justice—especially when Jesus reveals the Father as love?

There is no doubt that judgment is taught in Scripture and therefore there can be no doubt that punishment occurs at the hands of God. But religion has no authority, even if it feels the end justifies the means, in its blatantly fabricated threat of eternal torture. God disciplines us, says the book of Hebrews, as a loving parent, but he does not, out of his love, torture us. Nor did he pour out his wrath on his Son.

What happened on the cross was a “No” to wrath—and to retributive violence and the never- ending cycle of hatred spawned by an eye-for-an-eye. What happened on the cross was an undeniable, never before or never since event, once- in-all-of-history epic outpouring of selfless love on the part of God —Father, Son and Holy Spirit—declaring their undying, unending, eternal love for you and me. The cross of Christ is a “Yes” to Love, peace and mercy.

The cross of Christ offered a bridge from the death we live, apart from God—a bridge allowing us to be transformed, spiritually reborn, reconciled and given eternal life. Because Jesus absorbed the wrath of human sin, we may cross over from death to life (John 5:24).