Rest For the Weary 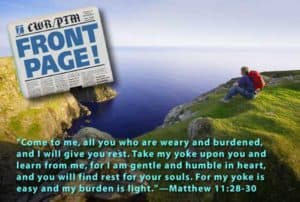 I heard a story about an American missionary named David who served in an African town several decades ago. David was amazed to see the heavy loads and burdens the Africans carried on their heads as a part of their regular jobs.

The most astonishing individual he met, in this regard, was a lady who had perfected the technique of carrying heavy loads on her head to such a degree that her peers called her “the human delivery truck.” Amazing at it seems to us, she delivered engine blocks from cars and trucks from one repair shop to another. According to the story, four men would lift the engine block on to a tray that she carried on her head—she would balance her cargo, and off she would go across town to deliver her heavy load.

One day the lady came to her destination and found that no one was there to assist her in taking the load off her head. She waited as long as she could, and finally she was forced to try to remove it herself. In so doing, she broke her neck and died.

David based his funeral sermon for that woman on Matthew 11:28-30, and here’s a small excerpt of what he said:

“The good news is that there is someone whose specialty is lifting this load. His name is Jesus. He will lift the weight and burden off the heads of those who come to him in faith.”

The context of Matthew 11:28-30 is about spiritual oppression. The rules-happy Pharisees taught and practiced legalistic religion, which was a heavy burden of performance, duty and ritual—not to mention guilt and shame when people were unable to measure up. Religion was a heavy spiritual burden on their shoulders—much like the physical burden of that engine block on the woman’s head in Africa. Jesus says:

…who are weary and burdened, and I will give you rest. Whatever wears you down, whatever causes you to lay awake at night, unable to sleep—whatever it is. You may have lived with a painful secret for many years, deathly afraid that your family or friends will discover the skeleton in your closet. You may be going through a divorce. You may be alienated from your brothers or sisters, and find it virtually impossible to be reconciled to them.

Whatever worries you—whatever stresses you out, Jesus invites you to bring ALL your worries and give them to him. That’s the first invitation in this passage—”bring me everything that you are carrying, I will take care of it, and I will give you rest.” Jesus invites us to trade our worries and shame and anxiety for the rest he will give us.

The people to whom Jesus originally spoke these words were yoked to authoritarian and oppressive religion. They were yoked, like the old yokes that were used to harness oxen together so that they could pull a wagon. They were trapped. They were in bondage. They couldn’t see any way out.

Jesus invites us to try on his yoke. Learn of him. Let him transform us from harsh, unyielding religious taskmasters into a grace-filled relationship with our heavenly Father. Instead of serving religion, serve me, says Jesus. My yoke is easy and my burden is light. Follow me—forget about the religion, he says. Jesus alone can give you and me rest. He alone is capable, big enough if you like, to shoulder the shame, guilt, pain and heartache we carry.

He alone can heal us from the disgrace and humiliation of our past.

Do you remember the movie, Schindler’s List? Otto Schindler was no saint. He was a heavy drinker, a womanizer, a black market dealer and a war profiteer. During the era of Nazi Germany, Otto Schindler, a German citizen and businessman, built a factory in Krakow, Poland, and hired Jewish laborers who had been placed in a ghetto by the Nazis.

The movie depicts Schindler as seemingly having no conscience about building his wealth at the expense of the persecuted Jews, at least initially. But when the Jews were taken out of the ghetto and placed into a concentration camp, it seems that Schindler started to realize that the German military intended to execute all the Jews. The moral black hole of what was called “Hitler’s Final Solution” began to come clear to Otto Schindler, and he started to identify with the desperate plight of Jews who worked in his factory.

Schindler arranged a secret deal with the commandant of the concentration camp. He made a list—hence the title of the movie, Schindler’s List. He made a list of the Jews who worked in his factory, and asked the commandant to transfer all those on his list to him. He explained that he was building a factory in Czechoslovakia that would make munitions for the German army.

The truth is that Schindler never intended this factory to be productive. In fact, after he literally purchased the lives of the Jews who worked for him in his factory in Poland, he took them to the new factory in Czechoslovakia and instructed them to deliberately manufacture defective ammunition for the German army. Schindler actually used much of the wealth he had accumulated by virtue of the low pay he gave to his Jewish workers to purchase their freedom and deliver them from certain death in the concentration camp.

All the Jews on Schindler’s List spent the rest of the war in relative safety, making defective armaments for the German army. And during the rest of the war Schindler exhausted the remainder of his fortune protecting his Jewish workers in the safe haven of his factory in Czechoslovakia.

Toward the end of the nearly three-hour movie Schindler and his factory workers are shown listening to a radio broadcast reporting the surrender of the German army and the end of World War 2. Schindler gathers his workers, who are by now his friends, and tells them that they are free.

As he and his wife prepared to leave the 1,200 Jews whose lives he saved, the Jews lined up around the car of their German savior. They presented him with a gold ring they fashioned from the fillings of their teeth. The ring was engraved with this message: “Whoever saves one life saves the whole world.”

When he is given the ring Schindler collapses from the weight of guilt and grief. He tells the Jews whose lives he had saved that he could have done more—he could have worked harder—he could have saved even more Jewish lives.

As much as Otto Schindler had done, he felt it wasn’t enough. What we are able to accomplish and contribute never is enough, is it? As long as our perception of our success in life is tied to our personal performance, then we will never, ever be able to do enough. No matter how much we do, no matter how hard we work, no matter how many people we help (or, in the case of Otto Schindler, how many lives we saved), it will never be enough.

There is only one Savior, only one Redeemer, only one name given under heaven whereby we might be saved. Otto Schindler worked hard, and in a heroic, superhuman accomplishment, single-handedly saved the lives of 1,200 people. But at the end, he broke down because he realized that he could not do all that needed to be done.

You may be in a similar spiritual place right now. You may be sick, unemployed or emotionally exhausted by a horrible family situation, or you may be in the middle of a divorce. You may have children who won’t talk to you, because of your real of imagined inadequacies as they grew up in your home. You have worked and worked and worked. You have tried to atone for the past. You have tried to make up for lost time, in terms of the parent you could have been, and perhaps should have been, when your children were home.

You have tried to start over, as a husband or wife—trying to be better—and save your marriage, but maybe it was too little, too late. We are all like the lady in Africa who was carrying an engine block on her head—a weight so heavy she could not remove it by herself.

Jesus gives us two invitations in our keynote verse:

The first invitation is for us to bring him all the weight of grief, pain, shame and heartache that we carry and exchange it for his rest. The invitation: Exchange our guilt and shame for rest in Christ.

The second invitation is a summons to take off the religious yoke that keeps us captive, and exchange it for following Jesus. The invitation: Religion exchanged for relationship.