See How He Loves Us 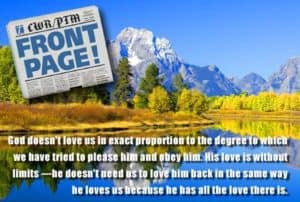 There’s a great story about a little boy who was trying to learn the Lord’s Prayer. One night he was kneeling down by his bed, and he prayed: “Our Father who are in heaven, how do you know my name?”

St. Augustine, revered as one of the great theologians of the Christian faith, once said that Jesus loves each of us as if there was no one else to love.
Time after time we read in the four Gospels about people Jesus met who felt and experienced his radically personalized, individual affection—no one they had ever known had talked to them, treated them and spent time with them the way Jesus did.

The eyes out of which Jesus saw and perceived others were never filled with contempt or disdain. Even when Jesus spoke harshly, as he did to religious authorities of his day, he did so out of concern for those authorities and for those who were being oppressed by them—he never spoke harsh words out of hatred or spite.

The little boy trying to learn the Lord’s Prayer said something incredibly profound—what kind of love is this love that God has for us that he would be interested in knowing our name?

What marvelous love the Father has extended to us! Just look at it—we are called children of God! That’s who we really are. But that’s also why the world doesn’t recognize us or take us seriously, because it has no idea who he is or what he’s up to.

Frederic Buechner, one of my favorite authors, in his book, The Magnificent Defeat, observes:

“We are children, perhaps, at the very moment when we know that it is as children that God loves us—not because we have deserved his love and not in spite of our undeserving; not because we try and not because we recognize the futility of our trying; but simply because he has chosen to love us.”

God doesn’t love us by degree—he doesn’t love us in exact proportion to the degree to which we have tried to please him and obey him.
His love is without limits —he doesn’t need us to love him back in the same way he loves us because he has all the love there is.

God loves us with what C.S. Lewis calls “Gift Love.” Gift Love is divine love—which can be expressed through humans, but only by God’s grace, because Gift Love is primarily unnatural for humans.

Some human love, apart from God’s grace, might be somewhat like Gift Love, but in its pure, unadulterated state Gift Love is a gift of God.

• The goal of Gift Love is to enhance and enrich another than to extract value from another.
• Gift Love endeavors to increase another rather than to diminish another.

• Gift Love is like an artesian well that forever continues to overflow.

That’s why we often speak of God’s love as un-conditional love.

On the other hand, C.S. Lewis says the kind of love that we normally express and receive can be called “Need Love”—Need Love is born of emptiness.

• Need Love sees those objects or persons it values as something it desires and covets to possess.

• Need Love is a black hole—a vacuum—or like a vampire that sucks dry the very essence of something or someone in order to feed its voracious appetite.

There are many times when we say to another person “I love you” when what we actually mean is that we want to make-over the other person into our own image, no matter what the consequence may be to that other person.

“God’s love is like sitting by a fire in the winter—you are just there in front of the fire. You don’t have to be smart or anything. The fire warms you.”

If you are cold, in need of love, God invites you to sit by his fireplace. He will not force you to do so—but there is plenty of room for each one of us by God’s roaring fire of love.