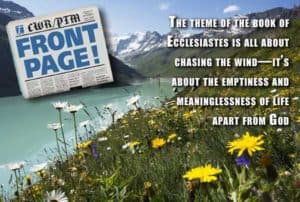 Call me the “Quester.” I’ve been king over Israel in Jerusalem. I looked most carefully into everything, searched out all that is done on this earth. And let me tell you, there’s not much to write home about. God hasn’t made it easy for us. I’ve seen it all and it’s nothing but smoke— smoke, and spitting into the wind.
Life’s a corkscrew that can’t be straightened, a minus that won’t add up. I said to myself, “I know more and I’m wiser than anyone before me in Jerusalem. I’ve stockpiled wisdom and knowledge.” What I’ve finally concluded is that so-called wisdom and knowledge are mindless and witless—nothing but spitting into the wind. Much learning earns you much trouble. The more you know, the more you hurt.—Ecclesiastes 1:12-18, “The Message: The Bible in Contemporary Language”

One of the first and most basic keys to understanding the Bible is one we learn when we start reading any literature at all. For example, let’s take the daily newspaper. There are many constituent parts of a newspaper, aren’t there? A daily newspaper (either the “old time” print version or the new-fangled electronic version) usually includes:

1) The front page. That’s where, if the newspaper is a big-city newspaper, world and international news is found. Allowing for the bias and slant of a particular newspaper (and they all have a bias) this news is “just the facts” news. If the newspaper is smaller, the news found here will be local, but it will still be so-called “hard” news.

3) Then there’s the sports page. The sports page is mainly “just the facts” news, but it is not earth-shaking news of wars and geopolitics. It not only includes the “hard” sports news, reporting on a recent athletic game, match, tournament or competition, but it also includes the opinion of sports writers and impassioned letters from sports fans. It’s just sports, of course, but some people think this is the most important part of the newspaper.

4) Then there is the classified section. Here one can find small, individual advertisements. Ads are purchased, attempting to link buyers and sellers of real estate, cars, pets and many other services. Jobs can be found in the classifieds. Because these ads are not free, and because longer ads are obviously more expensive, many abbreviated words and phrases are used to get the message across in the least expensive way possible. Abbreviations used in the classifieds aren’t normally used in other parts to the newspaper, but these abbreviations are still part of the newspaper. Classified abbreviations are just as valid, and just as true, generally speaking, as other portions of the newspaper.

5) Let’s not forget editorial cartoons and the “funny pages” themselves. Cartoons and caricatures are not intended to be “just the facts news”—but there are many times when people (I include myself) believe that some of the cartoons are more accurate, and more true, than other parts of the newspaper, where the coverage is often slanted in one way or another.

6) Newspapers also include obituaries and wedding announcements, as well as advertisements and promotional copy prepared and paid for by big companies and firms.

Just as there are many styles of writing and many genres of literature used in a daily newspaper, differing literary styles are present in many of the books of the Bible. The Bible includes history, including narratives of what happened and how it happened, prophecy, poetry, laws given to the Old Testament nation of Israel, stories with a lesson (called parables), teaching, letters with exhortation and inspiration—AND—in the case of our keynote passage today, it includes wisdom literature.

Without discussing all of the issues that arise from claims that the Bible is the “Word of God,” let me just say that I believe the Bible is a resource we should study and regard with deep respect. But we must not worship the Bible!

We can seriously misunderstand the Bible unless we read it as it was originally intended to be understood. Most people I know, who want to find out how their favorite sports team is doing, turn to the sports pages, rather than the classified ads. If we read a cartoon in the newspaper as if it is a “just the facts” front page news story, then we are going to wind up on a wild goose chase. Failing to read the Bible in the literary style in which it is written can result in people being taken “down the primrose path” by someone who calls himself or herself a pastor, bishop, minister, evangelist or anointed prophet.

The Bible includes accounts of sinful behavior—sometimes so graphic, both in terms of sex and violence, we wouldn’t want the very young to read those portions. But those accounts really happened—they are written as history. Obviously, when the Bible includes such a factual, historical record, it is not doing so because it is offering a prescription about how we should lead our lives. It is not advising that we “go and do likewise.” In such places it is offering history—what really happened to real people. Sometimes those historical records include a commentary about what happens when people live lives apart from God, but sometimes they don’t.

I’ve said all of that (and there is much more to be said on the topic, you can be sure) so that we might have a better understanding of what Solomon says here in the book of Ecclesiastes. Along with the Old Testament books of Job and Proverbs, Ecclesiastes offers practical advice. Some call these books “the wisdom literature” of the Bible. The title of “wisdom literature” is not to say that these books are the only wise parts of the Bible, but it’s intended to say that the impartation of wisdom in the primary purpose of these books.

• Ecclesiastes is not a book that undertakes a careful description of the gospel of Jesus Christ.

• Ecclesiastes is not a book dedicated to explaining God’s love.

• Ecclesiastes is not a book about how to think about the nature of God.

• Ecclesiastes is one of three “wisdom” books, among the 63 other books of the Bible, that offer us advice based on the life and experience of others.
Sometimes the advice we read about in Ecclesiastes, Job and Proverbs is tinged with regret and with ironic references. Sometimes the advice is not uplifting, but gloomy and depressing—because that’s the way much of life is, especially a life lived apart from God.

The theme of the book of Ecclesiastes is all about chasing the wind—it’s about the emptiness and meaninglessness of life apart from God.

Most scholars agree that Solomon wrote this book— let me paraphrase what Solomon had in mind as Ecclesiastes begins: “Take it from me. I learned it all. I experienced it all. I had it all. I touched it, I tasted it and I gratified myself with anything I desired. I gained knowledge. I acquired possessions. But in all of my sensual experiences and in all of my acquisitions I learned that enjoying life is elusive. Expectations that fail to materialize hurt and devastate. You’re left with a handful of nothing.”

Ecclesiastes is the deathbed declaration of Solomon, sharing the realities of life as he lived it. The “wisest man who ever lived” ends his life with a wise legacy. Here’s a summary of what I see as the last will and testimony of Solomon that he leaves to each of us:

• Hedonism will never fill our emptiness. Of course, sensual experiences gratify us, but they are unable to fill the deepest desires of our hearts and souls. See Ecclesiastes 2:1-2,10; 6:1-2

• Work will never fill our emptiness. Building and producing and growing and acquiring are blessings, but they too are unable to meet our innermost needs. It’s often been said that no one, when asked how they would live their life over again, would say, “I wish I would have spent more time at the office and less time with my family.” See Ecclesiastes 2:4-6, 10-11

• Materialism cannot fill our emptiness. Solomon died with lots of toys, but he testified that even if we die surrounded by lots of stuff we may still be empty. See Ecclesiastes 2:7-8; 5:10,13-15; 6:3-6

• Information and knowledge cannot fill our emptiness. The Internet is filled with information, of all kinds, but there are lots of lonely people who spend many hours every day on the worldwide web whose souls are parched and dry. Graduate degrees may fill our heads but not necessarily our hearts. In some ways, Ecclesiastes is saying that the more we know, the more likely we are to hurt, especially and particularly if we think knowing more stuff and having more information stuffed into our heads is going to make us happier and more successful.

Fast-forward about 3,000 years, from Solomon in Jerusalem to Johnny Cash, the man in black. Johnny Cash is one of my all-time favorite singers. He was a Christ-follower who lived a well-documented, imperfect life. While his sins became well-known, he made his faith in God and his love for Jesus equally known.

Johnny Cash recorded a song titled “Hurt” in 2002, one year before his death. Some believe it to be one of his deathbed declarations. Cash changed some of the original lyrics, as they were more explicitly about drugs and addictions, and turned the message into his own statement about the futility of life apart from God.

Here are some of the lyrics:

What have I become? My sweetest friend everyone I know goes away in the end and you could have it all— my empire of dirt.
From “Hurt” (written by Trent Reznor, first released on a Nine Inch Nails’ 1994 album).

Defining our lives by how much dirt we collect in our respective sand boxes is nothing but smoke. No empire of dirt will ever meet our deepest spiritual necessity. Alexander the Great, realizing that his kingdom of dirt extended as far as he could imagine, is said to have broken down in tears. According to a popular version of Plutarch’s commentary on this event, Alexander “wept with sorrow because there were no more worlds to conquer.” Alexander had his empire of dirt, yet he died, one month short of the age of 33, dissatisfied. Perhaps our generation would borrow from the words of Mick Jagger and the Rolling Stones to explain such spitting into the wind—Alexander couldn’t “get no satisfaction.” If the fuel gauge on the dashboard of your life points toward “empty”—remember the practical wisdom from Ecclesiastes:

• Hedonism will never fill your emptiness

• Work will never fill your emptiness

• Materialism will never fill your emptiness

• Information and knowledge will never fill your emptiness

Come, all you who are thirsty, come to the waters; and you who have no money, come, buy and eat! Come, buy wine and milk without money and without cost. Why spend money on what is not bread, and your labor on what does not satisfy? Listen, listen to me, and eat what is good, and your soul will delight in the richest of fare.