The Commands of God and the Traditions of Men 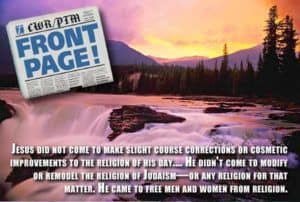 So the Pharisees and teachers of the law asked Jesus, “Why don’t your disciples live according to the tradition of the elders instead of eating their food with defiled hands?” He replied, “Isaiah was right when he prophesied about you hypocrites; as it is written: “‘These people honor me with their lips, but their hearts are far from me. They worship me in vain; their teachings are merely human rules.’ You have let go of the commands of God and are holding on to human traditions.” —Mark 7:5-8

Dietrich Bonhoeffer, widely regarded as a 20th century martyr, put to death by the Nazis just before the end of World War 2 because of his faith in Christ, once said, “Jesus calls men, not to a new religion, but to life.” Jesus did not come to this earth to start another religion, but to save the world from religion!

In our keynote passage the Pharisees criticized Jesus’ disciples, and in so doing, they criticized Jesus himself. While it might appear that the Pharisees were primarily concerned because Jesus and his disciples didn’t follow their purity laws—specifically the one that stipulated that before eating, observant Jews must wash not only both hands, but all the way up to the elbow—that was not their real agenda.

The Pharisees Jesus so often opposed in the Gospels are often seen by Christ-less religion as the first century equivalents of today’s religious fanatics. But such an interpretation overlooks the real culprit. The Pharisees Jesus opposed were the example of all performance-based religion, which exalts laws and traditions, while diminishing or ignoring God’s grace. The Pharisees were not the first religious professionals, nor were they the last, to exalt their own past.

It was on a point of ritual and performance that these spiritually blind guides, who fancied themselves as learned theologians, attacked Jesus. Jesus calls them hypocrites—two-faced spiritual actors playing the role that the traditions of the elders had written for them. Their outward display of pious reverence did not correspond to an inner spirit of meekness and humility. Jesus told them that they had missed the big picture while hanging on to spiritual minutia.

On another occasion Jesus chided the Bible reading, Bible studying scholars, who felt that they had mastered the scriptures of that day (which was of course what we know as the Old Testament). Jesus said that for all their scholarly Bible study, they missed the big picture:

You study the Scriptures diligently because you think that in them you have eternal life. These are the very Scripture that testify about me, yet you refuse to come to me to have life. —John 5:39-40

There they were, so engrossed with all their studies of the written Scripture that they missed the Word of God, God in the flesh, who was with them. Their cherished traditional interpretations of Scripture effectively blinded them to Jesus. They were too busy studying the Bible to embrace the Word who had inspired the Bible. Their Christ-less religion was their god, and thus they worshipped and obeyed the traditions of their god, which Jesus called human traditions, rather than the commands of God (Mark 7:8).

And let’s remind ourselves what Jesus defined as the commands of God:

Jesus did not come to make slight course corrections or cosmetic improvements to the religion of his day. Christ-less religion was then and is now fundamentally flawed. It is so broken and dysfunctional and corrupt that modifications won’t fix it. Jesus didn’t come to add new embellishments or ways to improve the old ceremonies. He didn’t come to modify or remodel the religion of Judaism—or any religion for that matter. He didn’t come to start another religion. He came to free men and women from religion, by fulfilling all of the demands of the old covenant on his cross, thereby providing unrestrained, unconditional and unfettered access to the very love of God, which makes us free in Christ.

Jesus gave us, as is so very clear in the New Testament, a new covenant, a new covenant in his blood. The new covenant is based on the command of God to love God and to love our neighbor, a command which we are able to live and fulfill by God’s grace, through the power of the life Jesus lives in us, and that we live in him.

The old is gone—kaput—it’s over. History. It’s been over and done with for almost 2,000 years. Religion is dead. Christ-less religion has no spiritual life—it is death, and it keeps dealing death to those who are entrapped by it.

Christ-less religion, with all of its legalisms, is like a virus—it is latent within all human beings. By our very nature, we believe that we can take care of all of our own problems—whether they are physical or spiritual. We don’t like anyone’s help—and that includes God.

But the only work that perfectly pleases God took place almost 2,000 years ago on the cross of Christ. That work pleases God because it was the very demonstration and proof of his love for us—it is the ultimate symbol and sign of God’s love for us:

Dear friends, let us love one another, for love comes from God. Everyone who loves has been born of God and knows God. Whoever does not love does not know God, because God is love. This is how God showed his love among us: He sent his one and only Son into the world that we might live through him. —1 John 4:7-9

Religious traditions seem to be innocuous enough at the beginning, but in the end Christ-less traditions poison our relationship with God by appearing to turn God into something which he is not. Unquestioned, lock-step obedience to religious traditions obscures the love of God, dismissing grace as silly, juvenile, soft and just too good to be true.

Traditions die hard. Advocates of religious traditions fight tooth and nail for every inch of their traditions, customs, practices and observances. Here’s an example:

In 1875 the ice cream soda was just beginning to be popular. It was made by mixing ice cream with soda—sweetened carbonated water. But then legalistic religion got involved.

In Evanston, Illinois the elders of the Methodist church thought that carbonated water might be a slippery slope that would lead to imbibing alcohol—and they were death on alcohol. So, because Christ-less religion is all about legislating laws to prevent sin (by its own definition)—and because Christ-less religion is intensely concerned about controlling its followers—the elders of the church believed the solution was to pass some laws.

The religious leaders pressured the civil government of Evanston into making a law that outlawed selling and serving ice cream sodas on Sunday—because they felt that 1) Sunday was more holy than other days, and 2) carbonated water fizzed and bubbled, and it might cause people to be tipsy—so, they reasoned, at the very least, let’s keep people from drinking that demon carbonated water on Sunday.

But an enterprising soda fountain clerk (at one time they were called jerks, without the negative meaning we often give to that word today) started to find a way to get around the new law. People still wanted ice cream on Sunday and they were looking for something to replace the now outlawed ice cream soda.
The soda fountain employee/jerk started to serve scoops of ice cream with thick syrup over the top. It was a way to get around the so-called corrupting influence of carbonated water. The new invention started to be called “a Sunday soda.” Sunday sodas became so popular that people started to order them on every other day of the week as well.

But religious professionals felt that they needed to have the last word. They complained that the Sunday Sabbath was being profaned by having an ice cream treat bear its name. So the soda fountains and ice cream parlors gave in—and changed the spelling from S-u-n-d-a-y to s-u-n-d-a-e.

An obsession with traditions of the elders—an obsession with the so-called holiness and righteousness of religious authorities can lead us far from the commands of God and his unconditional love. Making lists of rules and regulations, attempting to make people good and righteous via adherence to rules and regulations, is a futile, and beyond that, God-less exercise. Sin is much more than something we do, or fail to do. Sin is much more than external act. Sin is anything that separates us from God. Ironically, Christ-less religion that exalts its own traditions, customs and ceremonies is a great sin because it causes many to have a relationship with legalistic religion rather than with their loving God.