The Ultimate Declaration of God’s Grace 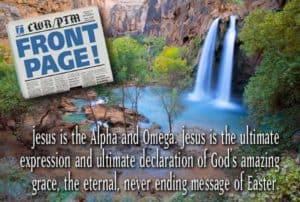 Americans are used to hearing the President of the United States make critically important announcements either from the Oval Office, simply speaking to television cameras, or to a combined, televised session of Congress. And, as they begin their term of office, Presidents give an inaugural address, during which many of them attempt to rally the nation behind their clear vision.

In 1865, during the final days of the Civil War, addressing a nation tired of bloodshed, Abraham Lincoln, who would be assassinated only 41 days after this address, said, in part:

“With malice toward none, with charity for all, with firmness in the right as God gives us to see the right, let us strive to finish the work we are in, to bind up the nation’s wounds, to care for him who shall have borne the battle and for his widow and his orphan….”

In the midst of the Great Depression, in 1933 Franklin Delano Roosevelt rallied the nation behind these words:
“Let me assert my firm belief that the only thing we have to fear is fear itself.”

I mention these examples of soaring rhetoric of an American President making a great announcement as but trivial physical illustrations of the scene being depicted here in the 21st chapter of Revelation. On our physical level, the famous words of former Presidents give us an extremely limited sense of the heavenly scene being described in Revelation 21:5-6. From his throne in heaven God is making an announcement that he will create a new order of things.

Here in Revelation 21 God announces a cosmic, universal, all-encompassing equivalent of the miraculous transformation God performs within individuals. Here’s how Paul describes the individual transformation, which the dramatic and victorious resurrection of Jesus Christ enabled:

For Christ’s love compels us, because we are convinced that one died for us all, that those who live should no longer live for themselves but for him who died for them and was raised again. So from now on we regard no one from a worldly point of view. Though we once regarded Christ in this way, we do so no longer. Therefore, if anyone is in Christ, the new creation has come. The old is gone, the new is here!—2 Corinthians 5:14-17

In this passage in 2 Corinthians 5 Paul lists two life-changing consequences of the death and resurrection of Jesus Christ, in terms of the personal and individual transformation it begins in the lives of those who accept him and surrender to him:

1) Paul ceased to make superficial judgments about others—as he says in verse 16, from now on we regard no one from a worldly point of view…

2) Paul clearly articulates spiritual transformation as an act of creation on God’s part, so that individuals become something they never were before. We are, as he says in verse 17, new creations—the old has gone, the new is here!
This individual act of creation that Paul talks about in 2 Corinthians 5 and the act of creation on a cosmic scale that Revelation 21 announces are based on the twin pillars of authentic Christian faith—the cross of Christ on Good Friday and the empty tomb of Easter Sunday.

On Easter God changes the rules of the universe. Everything is changed—everything is transformed. We move from the world of the first Adam to the eternity of Jesus, the second Adam. The resurrection of Jesus Christ is not simply our proof that there’s life after our own physical death. The resurrection of Jesus Christ is the beginning of God’s new creation—the launching point of the kingdom of heaven.

The resurrection of Jesus is the gateway of new life for the entire universe. The resurrection unleashes the incredible, staggering cosmic power of God whereby, as the first chapter of Colossians tells us, all things, things on earth and things in heaven, things we see and things we don’t, are brought into a state of reconciliation and peace (Colossians 1:20).

Here’s how God inspired the Hebrew prophet Isaiah to write of this cosmic transformation, when all things will be made new—when God creates a new order of things:

“Forget the former things; do not dwell on the past. See, I am doing a new thing! Now it springs up; do you not perceive it? I am making a way in the wilderness and streams in the wasteland, to give drink to my people, my chosen, the people I formed for myself that they may proclaim my praise.”—Isaiah 43:18-21

As he writes to the people of God under the old covenant, Isaiah uses the picture of the Exodus and the 40 years in the wilderness. God made a road for them through the Red Sea (in that case water was their mortal enemy) and then God provided the water they needed as they journeyed through the parched and arid wilderness.

Jesus himself is the Promised Land—he is the living water—and in and through him we see 1) individual, personal transformation here and now, as God creates in us, through our risen Lord, something of us that never was—and 2) we see the endless, eternal living water giving eternal life to the entire cosmos, as God creates a new order—the old has gone, the new has come!

We may be tempted to think that the resurrection of Jesus Christ is primarily all about proving that there’s life after death. The primary emphasis and theme of Easter is the launching of God’s new creation. I recently read Thomas Long (his book Growing Old and Wise on Easter) who credits Douglas John Hall with saying “resurrection is the ultimate declaration of God’s grace. It is not natural. It is not automatic. It is wholly dependent upon the faithfulness, forbearance and love of God.”

In our keynote passage we read of God, in Christ, as the Alpha and the Omega, which are, of course, the first and last letters of the Greek alphabet. God, in Christ, is the beginning and the end. He was there in what we think of as the beginning. He is the source and origin of all things. He is the end in the sense that he constitutes the goal and the aim of life. As Paul says in his speech in Athens, recorded in the 17th chapter of Acts, in him we live and move and have our being (Acts 17:28).

God in Christ gives the water of life freely—without cost—that is, by his grace (Revelation 21:6). This is water we cannot afford to buy, water no human resources can earn or deserve. Religious institutions cannot bottle and sell this water in return for human performance—this water is given by God, freely, by his grace.

God is a fountain of living water, satisfying and filling our spiritual thirst. It is in and through the resurrection of Jesus Christ that the water of life is unleashed, flowing freely to all mankind—flowing to the low places where mortals are in desperate need, for God gives his grace to the humble.

We celebrate the resurrection of Jesus in a Christ-centered way, for it is about Jesus’ own personal, victorious bodily resurrection—the resurrection is about him. In and through him we have new life now! He is alive—he is our risen Lord.

Jesus is the Alpha and Omega. Jesus is the ultimate expression and ultimate declaration of God’s amazing grace, the eternal, never ending message of Easter.