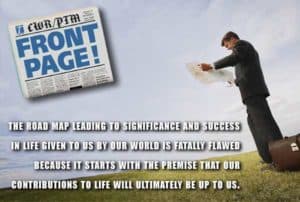 Chances are you have asked yourself one or more of the following questions: “Why am I living?” “Am I making a real difference?” “How can I be successful in my life?” “When all is said and done, will my life be regarded as significant or insignificant?”

As we try to answer these questions about what is truly important and how we can be a significant person, our world at large offers counterfeit solutions which lead us through a maze of meaningless activities. A famous musician flying in a private jet is worshipped as an idol—and accorded the ultimate honor of being called a “star” —while a farmer who works the land and produces crops for people to eat is seen as hopelessly out of step and perhaps even ignorant.

The chief executive officer of an investment company on Wall Street whose salary and bonuses for the year total over 10 million dollars is believed to be far more important than a single parent living in a ghetto, raising two children on near-poverty wages.

The parents whose children become doctors and lawyers are regarded as more successful parents than those whose children work in a factory. The bigger the house a person lives in—the fancier their car—the more credentials and diplomas earned, and the more money in the bank, like the accumulation of emblems and stripes and badges on a military uniform, the more successful and more important they are seen to be.

As Christ-followers, we can see that apart from Christ, the road map leading to significance and success in life given to us by our world is fatally flawed because it starts with the premise that our contributions to life will ultimately be up to us.

Ever since time began, men and women have been persuaded that the significance they contribute to and achieve in life is up to them. Ever since time began, success has been defined based on how an individual makes something of their life, so that life is seen as a measure of material success—power, prestige, position and possessions. The counter-intuitive call of Jesus invites us to allow him to make of us something we could never accomplish on our own.

When Jesus came to our world, he started to lay the groundwork and foundation for what he called the kingdom of God. He chose disciples to help with that initial foundation—blue collar fishermen, a money-hungry tax collector and a shifty, not-to-be-trusted person who eventually betrayed him. Not a bank CEO or college president in the bunch.

When measured by the values of our world, it seemed like Jesus didn’t have the right people on his bus as it headed for the kingdom of God. Jesus chose people Paul called “the foolish of this world”— Jesus called people to be his disciples and friends who were devalued and diminished to prove that the kingdom he was building was not at all dependent on the character and caliber of the people he was using to lay the foundation.

The kingdom of God was not and is not about the human beings who are a part of it. It’s about Jesus.

By God’s grace we come to realize that nothing of any lasting significance in our lives is about us—it’s all about Jesus.

As a standard greeting we’re often asked, and we often ask others, “How are you?” But you know, a better question that goes to the core of finding who we are and what we are looking for is, “Who are you?”

Who am I? Who are you? If we are Christ-followers, we belong to Jesus. The Jesus I Know is Who I Am.