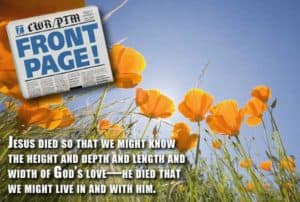 Why did Jesus die?” may seem like an easy question, because the answer seems obvious, doesn’t it? Normally, most Christians immediately answer the question something like this: “He died to atone, that is pay for, our sins. As the Lamb of God, he took away the sins of the world, redeeming us from sin through his precious blood. He died that we might die to sin, so that he might live in us, producing his righteousness within us.”

That answer is true—but it’s not the whole story.

Much of the Bible, both in the Old and New Testaments, presents the cross of Christ as a forensic event. That is, God uses the language and word pictures of the courtroom, of judgment given by a judge, determining physical punishments for breaking laws. But it is easy to let this word picture and the reality it depicts misrepresent God.

As we consider the question Why Did Jesus Die? we are tempted to follow the lead of currently popular television crime shows, and as spiritual crime scene investigators examine the evidence. When we do examine the evidence of the crucifixion, as a crime scene, we determine that Christ died for our sins. Jesus did die for our sins, and that’s part of the biblical answer to Why Did Jesus Die?— but it’s not the whole story.

Because of a distorted picture of God, many Christians, perhaps the majority of church-goers within Christendom, understand the cross of Christ something like this:

1) The problem is that Adam and Eve sinned. Everything was great. God was happy. But then Adam and Eve messed up. They ate that metaphorical apple. And God wasn’t happy.

2) God’s pet project, the Garden of Eden, was now a catastrophe. Adam and Eve had botched up the whole plan. Now, God the Father had to scramble—his neat, well-ordered plan had been bungled by Adam and Eve. So God the Father called an emergency Triune family meeting: “What can we do?” he asked God the Son and God the Holy Spirit.

4) This common misunderstanding of the cross of Christ, called “penal substitution,” leads people to assume that Father God had to be thinking something like this: “My moral law has been offended. Humans will never, in a million years, be able to pay for their sins. It looks like the only way for my honor to be defended, for my wrath to be satisfied, is for you—Jesus—to be the object of my wrath.”

5) So, the conclusion to all of this? Well, the common church-going person generally thinks that Jesus died because he had to satisfy the bloodlust of God the Father.

Now, it’s true that official teachings in many denominations address some of the erroneous extremes included by this characterization, but that’s not what I am discussing. I am discussing what the common layman believes. I want to call into question what the ordinary church-goer thinks about the answer to the question

WHY, knowing that the majority of church-goers at large have misconceptions about God and his nature, WHY has the religious industry allowed these misconceptions to continue?

One of the reasons that religious institutions have allowed this misunderstanding of God to continue and why they continue to perpetrate such fraudulent ideas about God is because religion itself needs an angry God. An angry and upset God serves the purposes of big business religion. An angry God keeps people enslaved to fear and superstition, under the control and sway of Christ-less religion.

Galatians doesn’t say that Jesus was crucified in my stead. It doesn’t place the emphasis on Jesus dying so that I don’t have to—here in the second chapter of Galatians we read that accepting God’s grace means surrendering our lives so that we, in effect, are crucified WITH Jesus.

When we become Jesus’ follower and his servant, when we fully accept God’s gracious offer and live by and in his unconditional love, then we die with Jesus and we live with Jesus. Thus we may safely and biblically conclude that Jesus died for us as a supreme example of the love of God, so that we might live!

• He was put to death by religious and political leaders because he opposed the politics and the accepted traditions and culture of religion of his day.

• Jesus was rejected by human government and human religion then—as he still is today!

• He was despised and rejected of men—because he offered God’s love and God’s grace. As strange as it might seem, humanity cannot abide God’s love (Romans 8:7). Humanity wants to go its own way, serving its own masters, customs and traditions. People are violently opposed to God giving something they are naturally inclined to believe they can and should earn by virtue of their own efforts, by the proverbial sweat of their brow.

When Jesus entered Jerusalem for the last time, on the day we remember as Palm Sunday, he was welcomed by the crowds because they thought he would do what they wanted him to do. But when they concluded that Jesus wasn’t going to fulfill their expectations, the palm branches of greeting and welcome, together with songs sung in his honor, were replaced by an angry mob who shouted “Crucify him!”

He was praised on Sunday, and crucified on Friday—that’s how quickly the crowds turned on him. It reminds me of a time when Napoleon returned from battle, greeted by crowds who were singing his praises. One of his top officers was riding through the adoring crowd with him and said to him, “Listen to them! You have to be satisfied with their praise!”

Napoleon replied, “Nonsense. With a small change in circumstances these same people would be shouting for me to go to the gallows.”

• Jesus did not die because he had to appease, vindicate and satisfy the wrath of God the Father, whose honor our sins had offended.

• Jesus took human rejection and refusal to accept God’s love, and conquered it on his cross. Jesus accepted violence and hatred, transforming it with the love of God.

• Jesus died so that we might know the height and depth and length and width of God’s love—he died that we might live in and with him.