God and Jonah: Ships Passing in the Night 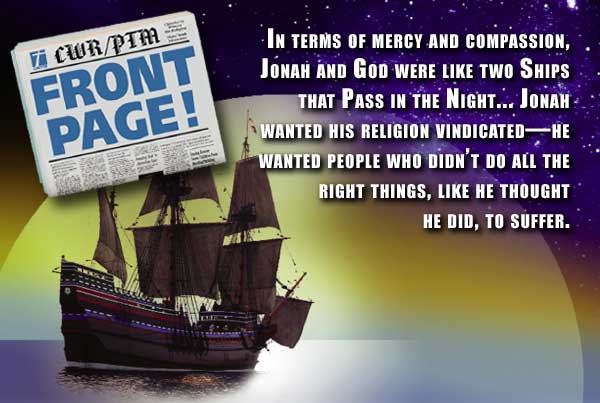 Many, even those unfamiliar with the Bible, have heard of Jonah. Most remember the story of Jonah as it is depicted in children’s books—a man named Jonah who was swallowed by a big fish and lived to tell the tale.
As we go a little deeper into the story (deeper even than the whale went with Jonah) we see that Jonah is yet another biblical example of how humans can completely misunderstand God. We can misunderstand God as Jonah did, and in terms of our relationship with God, be, as he was, like two Ships that Pass in the Night.
The book of Jonah begins with God telling Jonah to go to Nineveh, the capital city of the Assyrian empire. But Jonah had no intention of going to Nineveh (Jonah and God didn’t see eye to eye on this task).
Why didn’t Jonah want to go to Nineveh? The most probable reason Jonah didn’t want to go is that he didn’t want to give the people of Nineveh a chance to change their ways. It becomes clear as we read the book of Jonah that Jonah felt that Nineveh didn’t deserve any warning. Jonah felt that God should just destroy the people in Nineveh, who didn’t even try to keep God’s law like Jonah did.
CLICK HERE to continue
Please share: