Going to the Dogs – by Greg Albrecht

Leaving that place, Jesus withdrew to the region of Tyre and Sidon. A Canaanite woman from that vicinity came to him, crying out, “Lord, Son of David, have mercy on me! My daughter is demon-possessed and suffering terribly.” Jesus did not answer a word. So his disciples came to him and urged him, “Send her away, for she keeps crying out after us.” He answered, “I was sent only to the lost sheep of Israel.” The woman came and knelt before him. “Lord, help me!” she said.  He replied, “It is not right to take the children’s bread and toss it to the dogs.” “Yes it is, Lord,” she said. “Even the dogs eat the crumbs that fall from their master’s table.” Then Jesus said to her, “Woman, you have great faith! Your request is granted.” And her daughter was healed at that moment.—Matthew 15:21-28

This woman was desperate! She may have already taken her daughter to the Canaanite priests and exorcists—our passage doesn’t tell us. But we do know that this woman apparently had nowhere else to turn, because this was an extreme act on her part. She, as a woman, was so frantic to secure help for her daughter that she dared to speak to a man in public. More than that, as a Canaanite, this woman was a member of an ethnic group who were the despised, mortal enemies of the Jews. But in spite of the fact that Jesus and his disciples were Jews, she audaciously and brazenly spoke to a man she didn’t know, in public.
Now we know the end of this story, don’t we? We know that God promises, throughout the Bible, that he loves us and that he will take care of us. Jesus himself, a few chapters earlier in this very same book of Matthew rhetorically asks us that if we, as parents, know how to give good gifts to our children, don’t we realize that our heavenly Father will give us, his children, good gifts? (Matthew 7:11). He explained that if we ask God for bread he won’t give us something inedible and impossible to eat—like a stone (Matthew 7:9). God is not playing some cruel game with us, he won’t give us a snake when we ask for a fish (Matthew 7:10).
So with the benefit of hindsight, based on all that God has revealed to us of himself in the Gospels, and the entire Bible for that matter, we can be certain that Jesus, God in the flesh, loved this Canaanite woman. But when he first started talking to her it sure didn’t seem like he liked her!
This woman approached Jesus and cried: “Lord, Son of David, have mercy on me!” (verse 22). The Canaanite woman wasn’t a Jew, but she apparently knew enough about Jesus to know that he was a healer, and she was desperate —she was willing to try anything. She was a woman and a Canaanite, so she had to feel extremely awkward in a group with a bunch of male Jews. She was definitely a minority, and definitely defying social conventions. Her request was for mercy. Mercy!
CLICK HERE to continue
Please share: 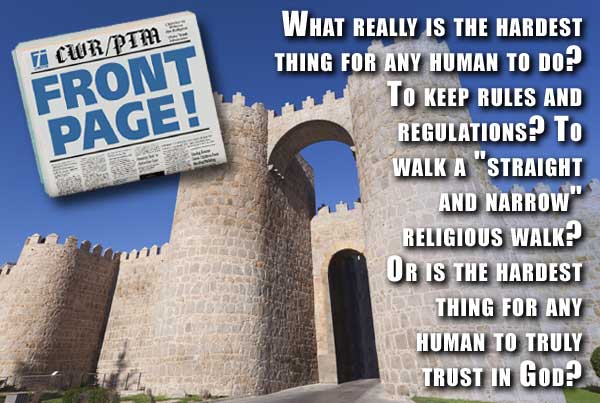 What Do You Mean … The Narrow Gate? - Greg Albrecht