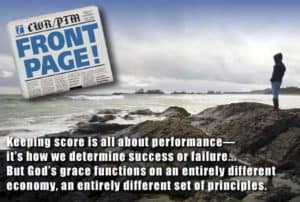 I learned to keep score at an early age via two of my passions—sports and music. The first score-keeping experience I had in sports was with the game of baseball. As I recall, I was about ten years old when I was introduced to the intricate system of using a scorebook to record the performance of each player in the batting order of each team. I was fascinated and became an avid scorekeeper as I listened to a man named Vin Scully announce games on the radio.

About the same time in my pre-teenage years I became passionately interested in the performance of rock n’ roll songs—as rated by the Billboard top 40. KFWB and KRLA were the two rock n’ roll radio stations I religiously (and I use that word advisedly) listened to in Los Angeles. Both of these radio stations would announce their own weekly top 40 and distribute printed copies of the top 40 to local record stores. I was a regular customer, picking up the KFWB Fab Forty and the KRLA Top 40 each week on the way home from school. These surveys told me how each song was doing—if it was going up the charts or down the charts— what its ranking was the previous week—and if it was # 1 how many weeks it had managed to stay on top.