Grace – Up on the Roof – Greg Albrecht 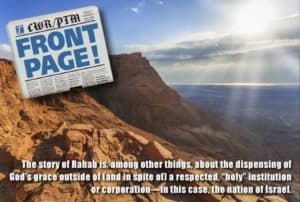 The second chapter of Joshua tells us that a woman named Rahab found grace in the most unexpected manner and place. This story would make a great Hollywood action-thriller. It’s a story that includes adventure, suspense, military conflict, spies—and, of course, a beautiful woman. It has all the elements of a block-buster hit at the box office.

The leading character of this drama is a prostitute named Rahab. We can be fairly certain that Rahab was not invited to join the important clubs in Jericho where she lived, because she lived and worked on the fringes of polite society. While Rahab’s way of earning a living may have been more acceptable in her culture than ours, it’s safe to assume she was not accorded the same respect as her culture’s equivalent of a Sunday school teacher. She provided a service that was utilized but probably not commended in Jericho.

Forty years earlier the nation of Israel had been delivered from the slavery and oppression of Egypt only to spend forty years wandering in the wilderness. Now they were on the edge of inheriting the promises of God—they were ready to take possession of the Promised Land. The Promised Land was Canaan, already occupied by a number of city-states and tribes, but God had promised Israel that their enemies would flee before them.

Joshua was the military commander of the nation of Israel, having been mentored and prepared by Moses for the last forty years. The first obstacle that stood in the way of Israel as they went in to take the Promised Land was the city of Jericho.

As the nation approached Jericho, Joshua was nearing the end of a long road of planning and preparation, but like any good military commander Joshua wanted to make sure and do all his homework. He wanted more specific information about the obstacles that would confront him and the nation of Israel.

So Joshua picked the equivalent of two modern-day Navy Seals. He chose two of his best warriors to go check out Canaan, and specifically, the city of Jericho. The two spies successfully disguised themselves, and made it across the river Jordan and entered into Jericho. This is when the story gets interesting.