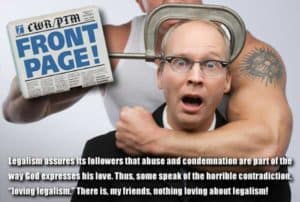 From the time the first human beings walked the face of the earth, literally billions of people have been living lives of religious legalism—attempting to do for themselves what God has already done for them—trying to replace God’s infinitely powerful grace with empty, useless human effort.

After Jesus came to us, telling us about and showing us God’s unconditional love, and after establishing his church, it seems we should have gotten the point. But even though Jesus, God in the flesh, came as one of us revealing the Father, religious legalism continues even among people who claim to be Christians.

In fact legalism, as a counterfeit and hopelessly flawed way of relating to God, has so insinuated itself into Christ-less religion many defend it by calling it “loving legalism.” In nominally Christian churches and homes all over the world, children are raised in an abusive environment which many consider to be one and the same as God’s love.

Thankfully, by God’s grace, many manage to escape the bonds of legalistic religion. Yet many religious refugees continue experiencing long-term effects—many who have been rescued from spiritual tyranny continue to feel they are not good enough because they are no longer following the religious rules, regulations, regimentation and rituals that they once learned.

They may attend Christ-centered, grace-based fellowships, but oftentimes the shame, guilt and oppression of their past just won’t go away. They feel condemned. They feel like they must work and work and “stop sinning” before God will accept them.

The truth is that there is no such thing as “loving legalism,” as distinct from the realistic definition of guilt / shame-based Christ-less religion.

Loving Legalism - No Such Thing!