Q&R with Greg Albrecht – “Should we boycott the wedding?” 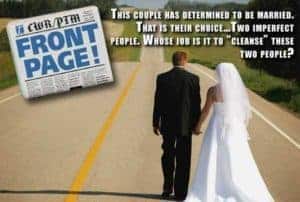 Recently I was asked to give my opinion about a married man, in the process of divorcing his wife, while dating a younger, unmarried woman. My immediate thought was the response of Jesus when he was asked by someone to get involved in a family about an inheritance. “Man, who appointed me a judge or an arbiter between you?” (Luke 12:14).

However, remembering that Jesus used the question as a way to discuss some of the more important spiritual issues surrounding it (see “The Parable of the Rich Fool”—Luke 12:15-21), I tried to respond in a similar way. The person who asked me the question said that the still-married man was “put under church discipline” by his pastor and that the pastor would not “bless” any remarriage until the man confessed his sin. Further, many in the church were thinking of “boycotting” the wedding (if there was one) even after the man legally divorced and could remarry.

This dilemma and the various prohibitions and remedies under consideration bring up a variety of religious practices which we should examine.

1) The boycott idea—in my experience, religiously-driven boycotts (of people, companies, organizations, products) are more about puffing up the spiritual pride of many who engage in a boycott than they are in actually reaching out in Christ-like love to people who are deemed to be in need of help and assistance.

What did the boycott accomplish? It didn’t bring Disney to its knees. It did give non-Christians an opportunity to talk about bad-spirited (they called them bigoted) people who call themselves Christians. It may have given some within the denomination that urged the boycott warm and fuzzy feelings that they were “standing against sin”—but when measured against the life and teachings of Jesus, it seems to me their stand was more about self-righteous pride anything else.

That doesn’t mean I believe that there isn’t a time to refuse to “grace” a gathering or activity with our presence when our presence might be taken as an endorsement of flagrantly offensive behavior. But it does mean that we should carefully think about the whole idea and motivation behind “boycotts.”

2) It seems to me, from the information I was provided, that the pastor of this still-married man attempted to deal with this issue in a “fair and balanced” way. The man who was still legally married to his wife had no biblical support in engaging in a relationship with another woman, married or unmarried, while he was legally married. When such behavior becomes a part of the life of a congregation (it often becomes so because the one who deserts the marriage in favor of someone else is married to someone who attends the same church) the church itself, as a congregation, given its governance, etc., has a right to let those who offend its generally accepted behaviors know that they have done just that. If said individuals wish to continue as a part of that congregation, then they must submit to the stipulations enacted by the congregation.

3) Beyond general behavioral guidelines for what is expected of church members, we must also address the manipulative ideas and practices that religion uses to “bring people to repentance.” In the 2007 movie There Will Be Blood, Daniel Day Lewis plays Daniel Plainview, an opportunistic, greedy and successful oil man who needs the permission of a member of a church so that he may construct an oil pipeline. The church member consults his pastor, who sees an opportunity for the church. The church’s young pastor confronts Plainview and tells him that if he will publicly confess his sins at their church meeting then the church member will allow Plainview to build his pipeline. The public confession takes place, high theatre for church members, convicting them of the “power” being displayed in their church. But in the end, There Will Be Blood leaves us with the impression that it’s all just a show.

Back in the 1730s and 1740s a minister named Eleazer Wheelock started to use a “technique” in his church called the “mourner’s seat” (later called the “sinner’s bench”). The pastor would target a flagrant sinner and order him to sit in the front seat/pew—and he would then direct his fiery sermon to this one person, who occupied the “mourner’s seat.” The pastor’s task was to bring this person to repentance, and the congregation was allowed to watch this scene unfold (somewhat like a steamy soap opera or Jerry Springer show).

Back in the day, with little or no entertainment, the “mourner’s seat” and the unfortunates who found themselves being publicly excoriated gave incredible prurient value, providing high drama and motivation for keeping those pews filled. When the mourner gave in (or gave up!?) then they said a prayer, which came to be called (and still is in some circles) the Sinner’s Prayer—a formulaic prayer, that having been said, was believed to impart forgiveness to the wayward person. Over the years the practices of altar calls, coming down the sawdust aisle, giving a testimony, saying the Sinner’s Prayer, accepting the invitation at some kind of crusade, meeting, camp gathering, etc.— all of these techniques go back to this manipulative methodology. It’s religion, in my opinion, not Jesus.

4) Then there’s the issue of how we “treat” a person who has knowingly offended and transgressed but now has put that behavior behind them (in this case the man is now legally divorced). This couple, like every other married couple, will bring imperfection to their union. Some religious folks seem to think it is the task of the church and other Christians to ensure that “unconfessed” sin is dealt with, so that everyone will repent, OR ELSE!

Well, not only is that an impossible task, it isn’t even “noble” (as I understand the gospel). I don’t think we are called to bring everyone to repentance, OR ELSE. This couple has apparently determined to be married. That is their choice, regardless of their past—whether they have been sexually active outside of marriage, whether they have sinned in any of a myriad of ways. Now they are getting married. Two imperfect people. Whose job is it to “cleanse” these two people? I think that such a task belongs to God.

So, whether or not their church decides that this couple cannot attend after they are married, or whether or not the church will perform the wedding or allow its facilities to be used for the wedding, as individual Christians (who are, in fact the church), friends and family will choose their own course of action. What individuals determine about attendance at this wedding, it would seem to me, would be based on many things—prior relationship with this man and woman, current relationship with them, as well as a sense of what attendance or lack thereof might do (help or hinder) in terms of the gospel, to this couple’s relationship with God.

Should We Boycott the Wedding?