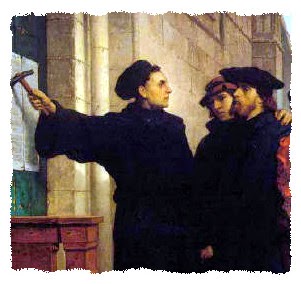 For this is what the high and lofty One says—he who lives forever, whose name is holy: “I live in a high and holy place, but also with him who is contrite and lowly in spirit, to revive the spirit of the lowly and to revive the heart of the contrite.”—Isaiah 57:15

Over 490 years ago, on the day now known as Halloween—October 31, 1517—a young Roman Catholic priest named Martin Luther posted 95 theses, or statements, on the door of Castle Church in Wittenberg, Germany. These 95 issues were a summary of what this young, courageous priest saw as problematic teachings and practices in his church.
Martin Luther had come to believe that the god of his church was not the God of the Bible. The posting of those 95 theses were the result of a long, spiritual struggle in which Luther had been engaged.
Luther seems to have become convinced that God was being misrepresented as an angry, wrathful god. Luther began to believe that the church was more interested in using fear to control people than it was helping them embrace freedom in Christ.
Most of all, however, Luther wrestled with the idea that God is holy, and that no matter how hard Luther tried, he was a poor, miserable sinner. Martin Luther could not see how a holy, perfect and righteous God would ever forgive and love a sinner like himself. Luther had done everything the church told him to do, he had performed all the rituals, said all the prayers, done the penance, but at the end of it all, he knew that he did not have the ability to produce the kind of life that would please God.
Then came grace.
CLICK HERE to continue reading
Please share: