Sorry Seems to be the Hardest Word – Greg Albrecht 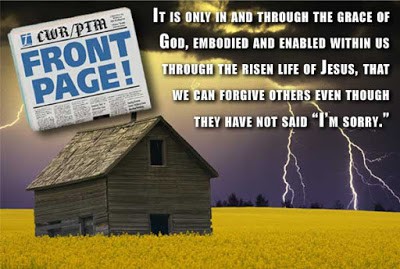 Unrequited love normally brings to mind memories of romantic, “puppy love” that failed to hear an echo. But teenage infatuations that end in agonizing, emotional dramas are surpassed in intensity by the crushing heartbreak experienced when, for some reason, a parent or child fails to respond to each other. This is a story of a girl and the relationship she yearned to have with her father.
Like many others in her generation, Karen grew up in a home ruled over by an authoritarian veteran of World War 2. Karen, now a senior citizen, grew up craving affection and praise from her father. But the times when she received attention seemed to have been reserved for those times when she needed (in her father’s estimation) correction.
Karen left home, went to college, married and made a new life. Even after her own children were adults and had themselves become parents, Karen continued to try to build a relationship with her father. She wasn’t seeking her pound of flesh for the wrongs of the past—Karen simply wanted to create an atmosphere for reconciliation. But Karen discovered that “sorry seems to be the hardest word.” When she talked with her father her attempts to discuss the oppressive relationship she had experienced and the punishment she regularly received were dismissed with “that’s how my father treated me.” At other times her father told her that the overbearing rules and harsh treatment to which he had subjected her had helped make her strong and prepared her for a successful life. He didn’t get it. He never did.

In his early 80’s the World War 2 veteran developed cancer, and Karen again tried to seek healing and reconciliation. The last time Karen talked with her father was only a few weeks before he died. She flew in to visit him, hoping he would be willing to talk about their shared past. She just wanted to hear one word—”sorry”—but she returned home crestfallen. When Karen, my wife, walked off the plane with an anguished look on her face I immediately knew her quest was unsuccessful.The knowledge that she would never be loved in return acted upon her ideas as a tide acts upon cliffs.—The Bridge of San Luis Rey, Thornton Wilder

“I’m Sorry”
It seems that the difficulty involved in articulating the words “I’m sorry” increases the closer the relationship one has (or had) with the person involved in the unresolved relationship. English poet and artist William Blake once noted that is easier to forgive an enemy than to forgive a friend.
Saying the words “I’m sorry” goes against everything that human beings naturally hold near and dear. We never want to be or appear to be wrong because such an admission of weakness or acceptance of failure and fault makes us vulnerable, and we fight for all we are worth against being vulnerable. In most cases, the goal of human life is seen as trying to become secure and safe, inviolate and immune from the actions of others. Saying “I’m sorry” is an unnatural admission of guilt which leaves us exposed and vulnerable.
However, …
CLICK HERE to continue reading
Please share:

The New Math of the Gospel of John

The Word is on Your Side - Greg Albrecht