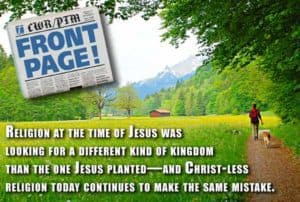 Have you ever had the experience of frantically looking for your keys only to find that they are in your pocket, or in the ignition of the car or hanging from the lock on the back door—just where you left them? You may have looked all over the house for your hat, only to find it sitting right there on your head. As you searched and searched, it was there, on your head, all the while.

The Interpreter’s Bible comments about Luke 17:21 saying that when Jesus said, the kingdom of God is in your midst, he was saying that “God’s dominion is already on display in your midst.” Such an emphasis is one obvious meaning of this passage—the kingdom has already come, and continues to be present in our world, through Jesus, the King of the kingdom, our risen Lord.

Jesus, God in the flesh, came to our world bringing the gospel, the good news that proclaims the kingdom of heaven. When he died, the kingdom didn’t end—it continued, for he rose from the dead, and is very much alive and present in our world, in the lives of those who believe in him and trust him.

When the King of the kingdom came, he never left, and not only that, the seed of the kingdom that he planted has continued to grow for almost 20 centuries. Let’s think about that concept of a seed for a moment—and as we do we’ll consider one of Jesus’ parables.

Do you and I have the courage to accept Jesus’ invitation to start living in his kingdom RIGHT NOW?

Kingdoms and Empires Come and Go - by Greg Albrecht

The Not Yet Kingdom Pt.3 - Greg Albrecht