After reading Brad Jersak’s excellent post on “Understanding Theological and Political Anger,” I decided to read a few of our recent blogs which discuss similar topics, linked to the end of most of our blogs. We are reposting “The Different Gospel of Political Pied Pipers,” which I wrote about a year ago, offered as a bit of a year in review. As Brad pointed out, may we all seek the peace of God, may we follow Jesus in tolerance, loving our brothers and sisters, may our anger and hostility diminish and be conquered by Christ who lives in us.

Christ-followers who have ever endorsed a political candidate or cause know how easily support can morph into fanatical partisanship, in turn causing one to desert the gospel, turning hearts and minds to a different gospel. A frenzied and rabid partisan spirit can quickly produce decidedly un-Christ-like conclusions and behaviors, and, in a spiritual context, is a key ingredient in self-righteousness and condemnation of others.

Such a spirit is, by definition, unforgiving, relentless, anti-Christ and immoral. It is a spirit of warfare and combat rather than forgiveness and peace. While all political parties and platforms and the pied pipers who lead them are fueled by a partisan spirit, with Paul I am astonished by the brash claims of the take-no-prisoners progressive moralists who baptize their dogmas, claiming them as moral and just.

We have just endured an agonizingly close and divisive national election.  Many on both sides remain madly and blindly in love with their partisanship and continue to condemn “others.”  In the wake of the blood-letting acrimony of our elections, rancor and stereotyping – hatred of the “other” team or the “other” side – is a spiritual and political virus-like plague that wars against healing, compassion and unity. Wearing a mask does not deter the virus of shaming, blaming and condemning.

To fanatically and blindly, without discrimination and a Christ-centered focus, be unreservedly  devoted to any political candidate or platform is to lose one’s way in following Christ… fanatical political partisanship is a different gospel. Progressive moralists adorn themselves with spiritual garb, claiming the moral high ground, condemning and shaming all who disagree as wicked and evil. That, my friends, is a different gospel.

CWR/PTM avoids political entanglements, endorsements and platforms at large. However, when someone builds an image of gold (Daniel 3), a god at whose feet all people are bullied and intimidated to worship, with Peter we say we must obey God rather than human beings (Acts 5:29).  When progressive moralists shame and condemn anyone who refuses to bow down to the idol of the anti-Christ moralism they have devised, their different gospel enters the intersection of Christ-centered faith and belief.

To exalt any politically movement as morally superior while condemning all others is not only wrong – it is evil and downright dangerous. I am an old white male, occasionally grumpy, I admit, but I reject the judgment of woke media and the progressive left that my gender, age and color of my skin defines me as a racist, homophobe, sexist, ignorant and bigoted hopeless derelict.

During a consultation last week my doctor, who appreciates my work as I do his, asked me about what I thought of the election. I told him that I was once again forcibly reminded that my primary identity is not found in politics. Kings and prime ministers and presidents come and go.  Jesus alone remains. Jesus is my primary identity. All that obsesses the media and so much that preoccupies us and seems so urgently pressing at the moment … none of it will last. My doctor, a man of faith, agreed.

Politics, political movements and political leaders come and go. They are not the gospel.  Following any political pied piper is to ultimately realize the fate of lemmings who drowned in the sea.

Speaking of lemmings who drown in the sea, The Pied Piper of Hamelin is a fascinating story worth re-visiting in this 2020 year of COVID-19. You may recall the medieval infestations of rats thought to be carriers of the bubonic plague as the backdrop of the story. The Pied Piper, dressed in dazzling clothing, promised to get rid of the rats for a price. The town agreed, whereupon The Pied Piper played his music and led the lemmings/rodents to the sea, where they drowned.  The people of the town reneged on their agreed upon payment and the Pied Piper was furious.  He returned and led all the children of the village away, never to be seen again.

Don’t mess with political pied pipers. Their enchanting music is a different gospel.  Don’t fall down and worship before the gods of moralism. They defy the gospel and they are no gospel at all. Don’t allow anyone to shame you and guilt you into following a different gospel.

With malice toward none; with charity for all; With firmness in the right, as God gives us to see the right, let us strive on to finish the work we are in; To bind up the nation’s wounds … to do all which may achieve and cherish a just, and a lasting peace among ourselves. 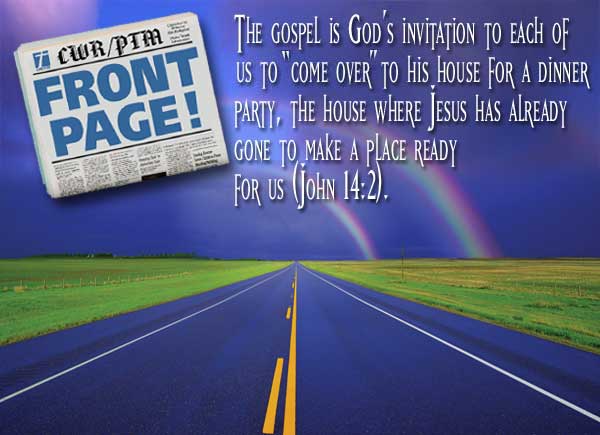