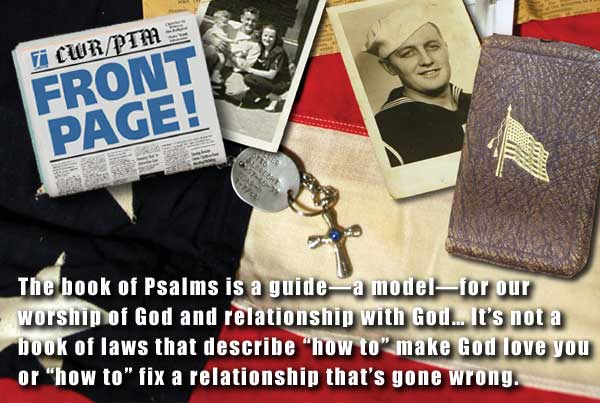 It’s just a little pocket Bible, small enough so my father could carry it with him as he served in the U.S. Navy during World War 2. My father was killed when I was only fifteen months old, and while I don’t have memories of him, I do have mementos that have been given to me. I have some faded photographs, his old cigarette lighter, the flag that draped his casket when he was buried, some copies of the newspaper describing the tragedy of his death—and I have that little New Testament Bible, which also includes the Old Testament book of Psalms.
I don’t know how much he read that little pocket Bible, but when I hold it I somehow feel closer to him. In fact, I feel closer to him when I read the book of Psalms in any format, written or electronic. Many remember this remarkable collection of songs and prayers in concert with some emotional peak or valley of their life. That’s really what the Psalms are—an emotional book with a soul connection. The book of Psalms is written using intense language that hits us deep down, in the bowels of our emotions—in our guts.
My father was not the only warrior to ever be supplied with the book of Psalms for comfort. Much has been written of the battlefield comfort that Psalm 23 in particular has provided. The Eagles have been my favorite band for several decades—the title track of their Long Road Out of Eden (2007) speaks of the horrible suffering and carnage from the war in Iraq. Here’s the introductory lyrics to that ten minute-long ballad:
CLICK HERE to continue
Please share: