Twice as Much as a Child of Hell – Greg Albrecht

Woe to you, teachers of the law and Pharisees, you hypocrites! You travel over land and sea to win a single convert, and when you have succeeded, you make them twice as much a child of hell as you are. —Matthew 23:15

The Pilgrim’s Regress by C.S. Lewis includes a fascinating story about a young boy’s first encounter with religion and one of its religious professionals. Since Lewis is one of my favorite authors, I’ve read and studied about his own childhood, and it seems that some of what he is talking about in this fictional story is autobiographical, with a direct relationship to his own experiences with Christ-less religion when he was growing up.

In The Pilgrim’s Regress Lewis tells us about a young boy named John, who was taken by his parents to see their local vicar (pastor). It was their way of formally introducing John to God. His parents talked with the vicar first—while John waited—and then, when that conversation was finished, John was invited to talk with the pastor alone.

At first, as John remembers the incident, the vicar seemed to be a warm and engaging person. They talked about fishing and bicycles, topics that captivate many young boys. But then, suddenly, the religious professional took a terrifying mask off the wall of his office, and put the mask on his face. As the vicar talked to John through that mask which, with its long white beard, was supposed to be a visual image of God, he told John that God is very kind, but he also has lots of rules. And if John didn’t obey all the rules, even though God is very kind, God would throw him into a black hole filled with snakes and scorpions.

Because Christ-less religion is all about control, it presents God as a controlling God. Not only does Christ-less religion control its followers with intimidating threats, it controls its followers by offering them an illusion. Christ-less religion knows that human beings love to think that they can take charge of their own destiny, so religion reinforces the idea that we all instinctively want to believe—that we can control our own destiny. The sad irony is that those who are duped by this seduction, in their efforts to avoid hell, often become twice as much a child of hell as those who recruited them.

Christ-less religion plays and preys upon our natural desire to be self-made men and women. We all yearn for a life that enables us to control everything that happens. We naturally want to be healthy and wealthy. We want to be loved. We want to be accepted and thought well of—by others, as well as by God.

Performance-based religion tells people that there is a way to do just that. God, says Christ-less religion, is waiting to bless us and love us (or at least love us more) and he will do that when we obey all the rules, work harder, pray enough, give enough and serve enough. He will reward us with his love, so says performance-based religion, if and when we do what we should.

Because we naturally fear pain and heartache and loneliness and that we will be unloved, we are afraid that God will reject us and not like us. Given our fears of rejection, pain and heartache, we are all too eager to buy into any program that religion offers. All religion wants in return is for us to sign on the dotted line—our promise to serve it for the rest of our lives. And in the process we sign up for hell on earth.

When people “sign on” to the program (some churches have what they call membership commitments) they think they are actually serving God because they have been assured that the rules, regulations, stipulations, ceremonies and rituals of that church are one and the same as God’s. The vast majority of people believe that when they please religion, they are pleasing God. It’s the big lie of religion—actually there are many religious lies, but this lie is perhaps the most audacious and blasphemous.

So off go the slaves of religion, joining a long line of people who are working on a spiritual chain gang. Slaves are given their own personal hamster wheel, where they start to work and work and work—give and give and give—try and try and try—do and do and do—so that someday, some way, they believe that God will be pleased with them. Of course, in the meantime, religious slaves are chasing that pot of gold at the end of the religious rainbow believing that they are controlling their own destiny.

The big religious lie is that God will love us if we work hard enough—the lie is that we are capable of doing all that is necessary to earn and deserve his love. Nothing could be farther from the truth of the gospel, but that lie is believed and taught, in one version or another, inside many churches within Christendom.

While there is certainly nothing wrong and nothing ungodly about hard work, billions fail to realize that the way to get ahead in our world of work and effort is not one and the same as getting ahead and building a relationship with God. Billions are deceived because they think God is like us. We like it when others make us look good, we like it when others serve us, we like those who do things for us —so, we reason, God must react in the same way.

But God is not at all like you and me! For example, let’s think of the hero, the human epitome of success—the rags to riches person, the person who rises from poverty to incredible wealth. When God determined to come to this world, in the person of Jesus Christ, he reversed that process. He went from riches to rags. God, in the person of Jesus, went from the riches of heaven, from eternity, from having all of the benefits and advantages, all of the power and glory he had, and rather than ascending to greatness—he descended into greatness. He became poor, that we might become rich—that is, rich in his grace.

God in the flesh became a dependent human baby, born into poverty, born of a teenager who became pregnant before she was married—he chose to be born into a country where the populace was occupied by a foreign army. He knew, in coming to be one of us, that his personal health as a human was not a priority. He knew that he would die in his early thirties a humiliating and painful death, a shameful death reserved for criminals.

He came to be one of us to save us from the self-directed, pride-filled lives we naturally lead—and the self-directed, pride-filled lives so many lead as captives of authoritarian, legalistic religion. He came to make us free—free in Christ—so that we might be and become all that God wants us to be, rather than being at the mercy of the deceptions and wiles of Christ-less religion.

When we are able, by God’s grace, to trust in God we truly rest in Christ. When we accept the gift of his grace, we experience the peace of God. By God’s grace we may be transformed from children of hell into God’s very own children. We trust our heavenly Father and we know that he will take care of us, now and forevermore, because of his goodness. The invitation God gives to all of us is to reject religion and trust in him alone.

Amid the Brain Fog of Wartime - Brad Jersak 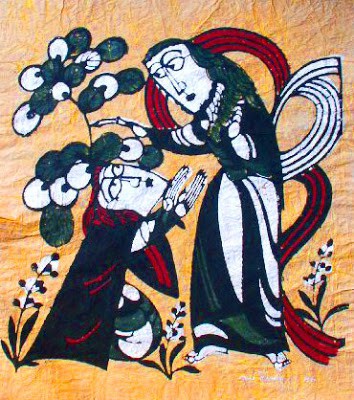 Going to the Dogs - by Greg Albrecht