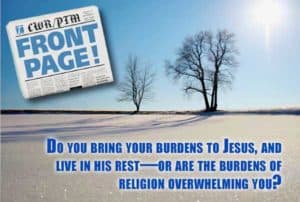 All this I have told you so that you will not fall away. They will put you out of the synagogue; in fact, the time is coming when anyone who kills you will think they are offering a service to God. They will do such things because they have not known the Father or me.—John 16:1-3

What happens when fear, shame and guilt meet God’s unconditional love? Human history is a record of titanic struggles and classic confrontations. Biblically, we think of Moses and the seemingly defenseless Israelites, hemmed in by the mountains, with the Red Sea at their back, being pursued by the finest, most well-equipped and trained army in the world at that time. We also think of that classic Old Testament story of David vs. Goliath.

Historically, we might remember the epic story of the armies of Alexander the Great, numbering some 35,000, defeating the 200,000-strong army of Cyrus and the Persians in 331 BC. When we consider those who have stood for the right and the true, we think of Abraham Lincoln as he confronted the evils and hatred of a nation torn apart by a bitter battle about slavery and racism.

In a similar context, we also think of the courage of Martin Luther King Jr. And of course we recall the “original” Martin Luther, who withstood the Catholic church and all of its earthly powers, traditions, religious affluence and influence when he declared that he was saved by grace alone. Of course, we will never forget Gandhi, with his peaceful, non-violent resistance, facing down the might of the British Empire.