Reprinted from the March/April 2003 Plain Truth

–Ask most people — Christian or non-Christian — what they think the book of Revelation is about, and chances are they will tell you it is a book about the “end of the world.”

But the futurist view (that Revelation is predicting events yet to be fulfilled) is only one of four traditional Christian ways of looking at the Bible’s most enigmatic book.

These four views are carefully and even-handedly analyzed and then applied to each verse and passage in Revelation: Four Views — A Parallel Commentary, edited by Steve Gregg and published by Thomas Nelson and Sons.

Here is a brief summary of the four approaches Gregg presents.

1. Preterist. Most prophecies in the book of Revelation were fulfilled during the time of the Roman empire.

A word of caution here. Not all preterists are created equal. The term preterism can describe two very different approaches: 1) A belief that the text is not inspired prophecy, but is rather a description of certain historical events amidst fanciful apocalyptic imagery. 2) A belief that the prophecies of the book are divinely inspired and were fulfilled mostly in the first centuries after Christ.

The first type of preterist, theologically liberal, advocates a later writing of the book (A.D. 95), and while accepting the historical reality of certain events in the text, believes John’s apocalyptic visions were never, and will never be, fulfilled.

The second type of preterist, theologically conservative, believes in an early writing of the book (before A.D. 70). Those who advocate this view point out the correspondence between Revelation and the fall of Jerusalem in A.D. 70. They point to Revelation 1:1, 19, which says that the predicted events must must “shortly come to pass.” They also point to Jesus’ Olivet Discourse (Matthew 24) as primarily being fulfilled with the fall of Jerusalem to the Romans in A.D. 70.

Most conservative preterists allow, however, that the last chapters of Revelation describe the Second Coming of Christ.

2. Historicist. The prophecies have been fulfilled throughout history and are still being fulfilled today.

While this interpretation is not widely in use today, those who have been steeped in popular futurist views are often surprised to learn that most of the classic commentaries from a century or more ago are written from a historicist viewpoint. Many of the great leaders of the Reformation and later also held to this view: Wycliffe, Knox, Tyndale, Luther, Calvin, Zwingli, Melanchthon, Newton, Huss, Foxe, Wesley, Edwards, Whitfield and Finney.

According to historicists, Revelation is a kind of survey of church history, with historical events symbolically portrayed. Historicists believe that exact time periods are specified, assuming that each day specified in the text equals a year in real time.

The challenge for historicists has been to align actual events with the details in the text (an approach shared by preterists and futurists). This requires large amounts of conjecture, and the flexibility to revise interpretations in light of ongoing world events.

Another prominent feature of Protestant historicism is its belief that the Antichrist of Revelation refers to the Papacy. For this reason, some die-hard historicists assert that all other interpretations of Revelation are Satanically inspired attempts to obscure the Antichrist’s true identity.

In any case, historicism has fallen out of vogue. Critics point out that it has not kept up with history much past the 14th century and that it is Eurocentric — not recognizing more recent and significant developments in the church in other parts of the world.

3. Futurist. Most prophecies beyond Revelation 3 are yet to be fulfilled.

This is the view held by most contemporary North American evangelical writers and teachers. Somewhat ironically, futurism was originated in 1585 by Francisco Ribeira, a Spanish Jesuit priest, for the purpose of refuting the historicist views of the Protestant reformers.

The most popular version of futurism today is dispensationalism, which has only been around since 1830, when J.N. Darby began teaching his ideas of a secret Rapture of the church (Revelation 4:1) followed by a tribulation period, and a 1,000-year rule of Christ.

Futurists tend to take a literal view of the book of Revelation. Since futurists believe that few, if any, of the events from chapters 4-22 of Revelation have taken place, it is easy for them to assert that most of these prophecies are to be taken literally (whereas preterists, historicists and spiritualists must wrestle with symbolic interpretations of passages about the two witnesses and the four horsemen, for example).

This literal interpretation of the highly symbolic book of Revelation ignores the style of writing God inspired John to use. The first key in understanding literature of any type is to determine the kind (genre) of literature it is.

Revelation is prophecy, letter and apocalyptic — with the apocalyptic style predominating. Apocalyptic style was well known at the time John wrote, using cryptic meanings and symbolic images. Above all, apocalyptic literature is born of immediate persecution and oppression and anticipates the final triumph of good over evil.

Disregarding the language God inspires to convey his message, futurists conveniently avoid having their “this is going to happen in the near future” approach tested by historical events.

Dispensationalists, in particular, can prognosticate freely with the confidence that they will be raptured before the bulk of Revelation is fulfilled and will not be around on earth to be embarrassed by any inaccuracies in their predictions.

On further thought, this approach renders the book irrelevant and of little practical use for most Christians, as they either will have died or will have been raptured before its fulfillment.

4. Spiritual (or Symbolic or Idealist). Most prophecies portray the ongoing cosmic conflict of spiritual realities and may have many fulfillments throughout history.

This actually represents a variety of approaches that look for lessons or principles — often recurrent in history — symbolically depicted in Revelation. Noting the apocalyptic style in which the book is written, this interpretation sees the central theme as the triumph of good over evil, of Christ over Satan. Passages that other approaches regard as depicting chronological events (such as the seals, trumpets and emergence of the beast) are regarded allegorically by spiritualists as recurring realities in history as part of God’s sovereign plan for humankind.

The obvious advantage of this view is that there is no need to match events described in the book to real events. The disadvantage is that the book of Revelation itself claims to predict certain specific events (1:1).

Steve Gregg points out that, although scholars and teachers may label themselves with one of these distinct methods for interpreting the book of Revelation, in practice, they often use various combinations of the four.

Revelation is a complex book. Because it is part of Holy Scripture, we can trust that it has value for all Christians. Those who seek to understand it would do well to learn from a variety of sources and to familiarize themselves with the strengths and weaknesses of the different approaches.

It is disturbing to hear someone claim that theirs is the only approach, or worse yet, to label others as non-Christian merely because they interpret the book of Revelation differently.

Steve Gregg’s work is therefore of great value in bringing Christians together and promoting mutual understanding and cooperation, as well as in saving students of the Bible from extreme and destructive interpretations.

Q&R with Greg Albrecht - "The End Times" - Is Jesus coming back? 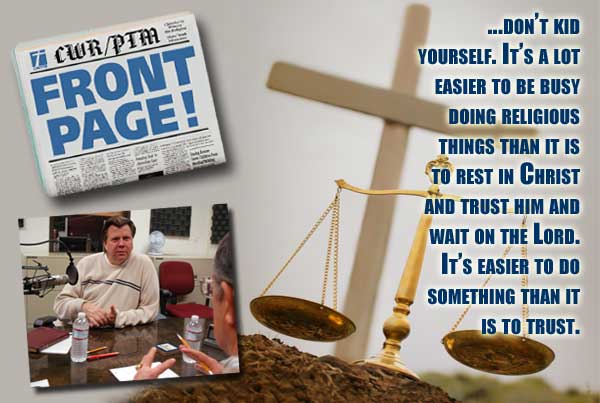 Grace on Trial - by Greg Albrecht (Interview with Steve McVey)