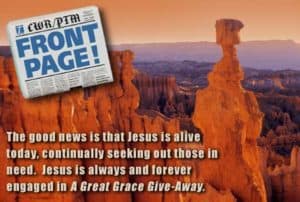 David asked, “Is there anyone still left of the house of Saul to whom I can show kindness for Jonathan’s sake?” Now there was a servant of Saul’s household named Ziba. They summoned him to appear before David, and the king said to him, “Are you Ziba?” “At your service,” he replied. The king asked, “Is there no one still alive from the house of Saul to whom I can show God’s kindness?” Ziba answered the king, “There is still a son of Jonathan; he is lame in both feet.” “Where is he?” the king asked. Ziba answered, “He is at the house of Makir son of Ammiel in Lo Debar.” So King David had him brought from Lo Debar, from the house of Makir son of Ammiel. When Mephibosheth son of Jonathan, the son of Saul, came to David, he bowed down to pay him honor. David said, “Mephibosheth!” “At your service,” he replied. “Don’t be afraid,” David said to him, “for I will surely show you kindness for the sake of your father Jonathan. I will restore to you all the land that belonged to your grandfather Saul, and you will always eat at my table.” Mephibosheth bowed down and said, “What is your servant, that you should notice a dead dog like me?” Then the king summoned Ziba, Saul’s steward, and said to him, “I have given your master’s grandson everything that belonged to Saul and his family. You and your sons and your servants are to farm the land for him and bring in the crops, so that your master’s grandson may be provided for. And Mephibosheth, grandson of your master, will always eat at my table.” (Now Ziba had fifteen sons and twenty servants.) Then Ziba said to the king, “Your servant will do whatever my lord the king commands his servant to do.” So Mephibosheth ate at David’s table like one of the king’s sons. Mephibosheth had a young son named Mika, and all the members of Ziba’s household were servants of Mephibosheth. And Mephibosheth lived in Jerusalem, because he always ate at the king’s table; he was lame in both feet.—2 Samuel 9:1-13

Like most stories, the background of this narrative helps us understand why King David went out of his way to find Mephibosheth and demonstrate such amazing, remarkable and unheard of generosity and kindness to him.

Before David became king he became good friends with Jonathan, the son of Saul, who was king at the time. Because of Saul, David and Jonathan’s friendship was an awkward relationship. As Jonathan’s father, Saul knew that David had been chosen to replace him, and thus he started trying to kill David. For some time David was on the run, hiding from Saul.

Several times, while running away from Saul, David found himself with a “perfect” chance to kill Saul. David could well have justified taking the law into his own hands, and killing Saul. He could have reasoned that God had not only chosen him to be the next king but now he was giving him the opportunity to take Saul’s life and assume the throne God had promised him. And of course, David could have also logically concluded that this whole drama was a matter of the survival of the fittest—if he did not kill Saul, eventually Saul’s attempts to kill him would succeed. But David turned the other cheek—he spared Saul’s life.