Are We Actually Alienated from God … or Is It All in Your Head? Brad Jersak

For it pleased the Father that in Him all the fullness should dwell, and by Him to reconcile all things to Himself, by Him, whether things on earth or things in heaven, having made peace through the blood of His cross.And you, who once were alienated and enemies in your mind by wicked works, yet now He has reconciled in the body of His flesh through death, to present you holy, and blameless, and above reproach in His sight (Col. 1:19-22).

The following rather brilliant question arrived today from a friend of mine, and after giving it some thought, felt it was worth sharing with our CWR blog readers. 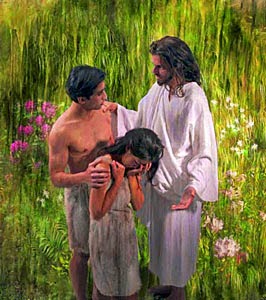 A: Let me preface it by saying that one’s theology determines the translation of the passage. So, for example, the NLT translation of Col. 1:21 see it this way: your sinful thoughts and actions have in fact alienated you from God. But the King James Version (surprise!) of Col. 1:21 reads much more like what you suggest.
The alienation is in your head. I think that’s how my friend Steve McVey might preach it and in some ways, that’s what I’m suggesting in The Gospel in Chairs (and in A More Christlike God).However, I think the answer must be yes and no, because alienation can be unilateral … that is, even if God does not alienate himself from me, I can somehow alienate myself from him. Or in the language of 2 Cor. 5:19, although God did not need to be reconciled from me, I needed to be reconciled to him.

This is the story of the prodigal son. In his mind and in his actions, you see him alienating himself from the Father’s house, but you never see the Father alienating him. The problem is that even an imagined alienation somehow becomes our reality in his life. He’s really living in the pigpen; he’s really cut off communication with the Father. And it gets worse.

We might say that ‘the wrath of God’ is a metaphor for God giving us over to our willful alienation from him. He doesn’t lock the son in the house or strap him to a gurney. He lets him go experience the alienation. But he doesn’t
actively alienate him. He doesn’t kick him out of the house. He waits and welcomes the son out of the self-imposed alienation.

But you can imagine this alienation in the son’s head and how he might even tell the story as he’s whining to others. How the Father somehow screwed him over. Or perhaps how the Father must now really hate him. How ‘I could never go back there.’ And when he musters up the courage to return, he assumes the father-son relationship has been broken. And that’s the lie.

The older brother, too, experiences the alienation in his mind in that he self-imposes a slave-relationship to the Father. Another huge lie that leads him to drivenness, self-righteousness and a need to convince others (even God) that they are alienated too. How very ‘Evangelical’ of him. What a horrendous lie!But while we are acting out this alienation (as powerless, as sinners, as enemies – Rom. 5:6, 8, 10), Christ demonstrated clearly that God has not alienated us. At the Cross (before we repent, before we believe) he has already reconciled us (‘brought us back’). He forgives and welcomes us home. So, part of repentance is coming to our senses about the imagined alienation so that we will stop living it as real.

Finally, we might need to re-imagine the Adam and Eve story. Their imagined alienation sent them hiding in shame and clothing themselves with fig leaves. But there also seems to be a real alienation when they are sent from Paradise.
And yet … it appears this is alienation from Eden, not from God, since God apparently goes with them, continues to interact with them and care for them – even murderous Cain, before and after killing his brother.

In other words, our imagined alienation from God (Adam’s, Eve’s and mine) leads us to a fallen mode of being
(in fact), while at the same time, God himself accompanies us beyond the Garden and lives among us in our brokenness. This is good news and becomes the best news, when the New Adam, Jesus Christ, comes to live with us in the flesh and provides the way back to Paradise and the Tree of Life (i.e. the Cross).
Please share: