“But if there’s no hell…” We don’t deny there’s a hell. Brad Jersak with David Goa

Even after my most recent CWRblog post about hell, titled “What if you’re wrong about hell?” I still can’t tell you how many people object with a question that begins, “But if there’s no hell…”

How many times have I responded, “Of course there’s a hell! I’ve been there—seen it with my own eyes, my own heart and my own Bible.” The issue is not the existence a hell, but whether we have the eyes to see its true nature.

To that end, I raised the topic with my godfather David Goa, who always knows how best to set me straight. The following notes represent my best effort at distilling the essence of our conversation:

We don’t deny there’s a hell.

Hell is very real and it’s very real for a helluva lot of people and very real in our own lives.

People cling to unhelpful images of hell because they’ve experienced incalculable pain and they hope that somehow in the next life, “those bastards will get their comeuppance.” And who am I to blame them? We don’t know the depths of their torment. But what’s behind that furious desire is their deep suffering, which is itself an “outer rung of hell,” just as Dante described. Like the word hell, Dante’s Inferno should not be so readily discarded. Read it: he’s talking about the human condition and the hell of our own making.

In the deepest hell of Dante’s Inferno we don’t find fire. There we find Satan buried waist-deep in ice. Ice represents the alienation of those who have no ability to care. And what is the Sheep and Goats judgment of Matthew 25 but that? The inability to see. To miss doing your life a good turn by communing with the stranger.

And Christ would say, “I don’t judge you with hell—you’ve already created it in this world. You’ve extended the precincts of the kingdom of alienation. But the righteous One shall come, the Justice who makes things right.”

And each of us are there. God knows I’m a goat more often than a sheep. To be a goat is part of the human condition. In all those periods when I’ve failed to be present to the full meaning of the being of the human. In that state, Christ calls us: “Please come back. Come back to recognizing. That is the place of the kingdom of communion. The hungry, the naked and the thirsty are my gifts to you. And the fact that you turned down the gift … well, you are better than that. You are better than that. You don’t have to turn down the gift. You can receive the gift and you don’t need to be afraid.”

Hell is such an important term. Though is has been badly abused, it is also so important. Don’t jettison it. Reposition and redirect it. Put it where it belongs because it has work yet to do. 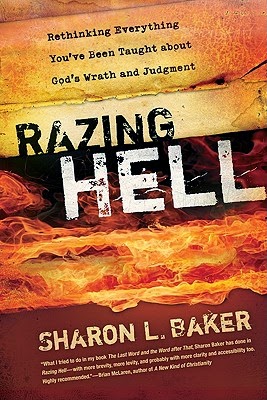