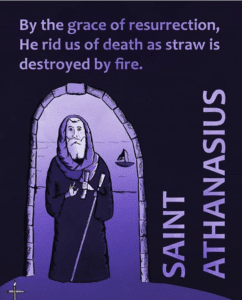 I recently came across the citation from St Athanasius (via creativeorthodox.com) that beautifully compares the resurrection of Christ to a fire that completely consumes death as if it were dry straw. The comparison reminded me of the range and frequent use of fire as imagery associated with the person or acts of God. A brief survey serves as a healthy meditation, not only on the various comparisons, but also how these evolve with our illumination by the Spirit, who is also linked with fire at times.

Ancient peoples would have experienced fire as destruction before they ever learned to employ it for light or heat, and when the fire of destruction would fall from heaven as lightning or burst from the earth via volcanoes, our forefathers connected the dots between destructive fire and the person and wrath of God. They assumed the fire that devours was sent by God as punishment, as we see in biblical stories like the end of Sodom and Gomorrah. When that fire is used against one’s enemies, it could serve as a powerful vindication that God is on ‘our side’ — as in 1 Kings 18 in Elisha’s showdown with the prophets of Baal or 2 Kings 1 when he calls for fire to kill Ahaziah’s troops.

But fire was not only seen as destructive. We have other passages where fire is employed for its cleansing properties. Malachi regards the judgements of God as a gold refiner’s furnace, purging the gold or silver of ‘dross’ or impurities. Similarly, Paul in 1 Cor. 3 describes the fire of God consuming all that is combustible in us … poor motives, for example, as if they were wood, hay and stubble. But again, this is only so the gold, silver and precious stones of our true selves will shine brightly through the old tarnish. Hebrews 12 says that God himself IS this consuming fire. So in the end, the destructive fire is to be welcomed, even if seen as a ‘trial by fire.’

A third sense of fire is associated with the person and work of the Holy Spirit. We hear from John the Baptist that Christ will baptize with the Spirit and with fire, and while I suspect John was thinking of judgement, the New Testament sees that promise fulfilled with the outpouring of the Spirit in tongues of fire on Pentecost. This divine fire not only cleanses but empowers, and gives those who receive it the properties of fire (symbolically light and heat), which is to say, the Spirit inhabits us with glory, transfiguring us from glory to glory, so that we can stand in that glory which is the passionate love of Christ himself.

Some of the early church fathers imagined this using the picture of a sword being forged in the intense heat that makes for the highest quality steel. Placed in the flames, it’s not that the steel would become other than steel, but while in the flames it would bear the heat and glow with the light of the fire itself. So it is, they said, with those forged in the fire of God’s Spirit. Thus, the fire was not destructive, but rather instructive and constructive of our participation in the divine nature.

There are many ‘what about this questions’ that attend divine fire analogies. What about those parables of Jesus where unfruitful branches are cut off and thrown into the fire? Or when the wheat and tares are separated by angels and the weeds thrown into the fire. Rather than skirting these force of these texts too quickly, we need to undergo their force — their fire. Such parables remind us of the same point Lewis makes by using lion imagery for Christ. God is ‘good’ but he’s hardly ‘safe,’ much less ‘tame,’ if by that we imagine we can domesticate him!

But in saying this, let us also assert the first point as most important. God is good. God is love. And thus, for all its other properties, the Divine Fire is the unquenchable Flame of Love (also pictured by the Sun) — the One who radiates the Light and Warmth of Love to those coming in from the cold, dark night of winter.

Q&R - Does Christ 'deny us'? with Brad Jersak