﻿﻿How Far Will God Go For Love? 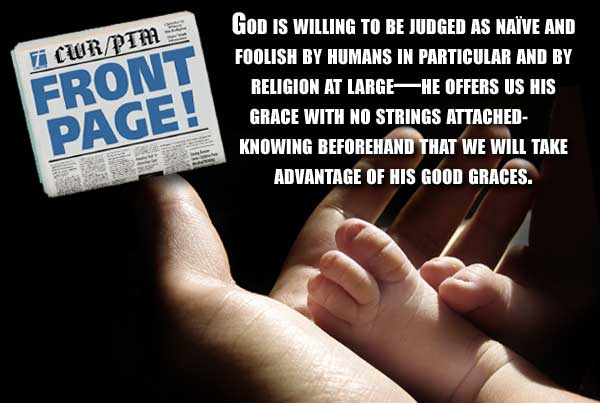 Lending institutions place a cap or limit on the total amount of purchases you can charge to their card. They will only let you go so far before your credit runs out. How far can we go with God before he says to us “That’s it—my grace has its limits!” Is it possible to use so much of God’s love that our account will be “maxed out”?

Of course God’s mercy, grace and love are endless. As and when we request forgiveness, God will always forgive us. That’s one of the attributes that makes him God. But, is it possible to take advantage of God’s good graces? Surely he isn’t like an indulgent grandparent who just sits on his throne, watching us willfully lying, cheating and stealing without ever coming to a point when he won’t extend any more grace! Isn’t it possible for us to come to a place when God says to us, “You’ve gone beyond the limits of my compassion. You have too many sins on your sin debit card now—I can’t extend any more grace to you.”

Let’s think about the cross of Christ—and how far God, in Christ, went, to demonstrate his love to us.

In coming to be one of us, to live among us as one of us, without participating in our sins, Jesus knew ahead of time exactly what was in store. He knew that he would be rejected, misunderstood, despised and ultimately killed in the most painful, degrading and shameful way humans could devise, at that time—but he came to us anyway. That’s how far he went to demonstrate his love.

If you knew that you would be tortured and beaten and killed if you showed up at a particular place at a particular time, you wouldn’t go, would you? I wouldn’t either. But God, in Christ, did just that. He knew exactly what would happen to him and how he would be treated here on this earth, but he came anyway. That’s how far he went to demonstrate his love.

We are, as humans, supremely unlovable—with no redeeming qualities—yet God loves us anyway, and will never stop doing so. God is willing to be judged as naïve and foolish by humans in particular and by religion at large—he offers us his grace with no strings attached—knowing beforehand that we will take advantage of his good graces.

Vulnerability is a cornerstone of our relationship with God. In the person of Jesus, he laid himself bare before us. We can trust him implicitly because of his complete vulnerability to us—we know him because of the love he will always demonstrate to us. And we’re able to love him because, as 1 John 4:19 says, “We love because he first loved us.”

Because of his love for us, God will go as far as to:

• be ridiculed and shamed, as Jesus was.
• search for us in the most embarrassing and shameful places.
• humble himself to find us.
• become vulnerable to our self-centered lusts and greed.

He will allow us to reject him and betray him and abandon him—but he will never, ever abandon us.

Jesus, God in the flesh, became so vulnerable to us that he allowed us to kill him. Yet, in spite of our track record, God is not a pain-inflicting God who is angry and upset with us, insisting that his honor be redeemed. He will climb the highest mountain and dive into the deepest sea to find us. He will never, ever give up on us. He will always keep coming after us.

That’s how far God will go.