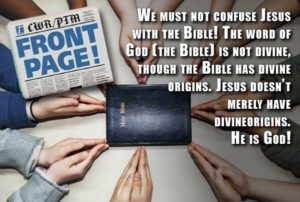 You study the Scriptures diligently because you think that in them you have eternal life. These are the very Scriptures that testify about me, yet you refuse to come to me to have life (John 5:39-40).

You diligently study the Scriptures, Jesus says. He’s speaking to the religious leaders of his day with whom, in this chapter, he had come into conflict. For that matter, he came into conflict with them almost every day of his ministry, and in almost every chapter of the Gospels. You, he said to the religious leaders of his day, diligently study the Scriptures because you think by them you possess eternal life. These are the very Scriptures that testify about me. Yet, ironically, you refuse to come to me to have life.

The context of this chapter has to do with the healing of a man who had been waiting and hoping to be healed for 38 years. When Jesus healed this man, the Jewish leaders of that day were extremely upset. So much so that in verses 16-18 we read the following:

So because Jesus had done these things on the Sabbath, that is, he healed this man who had been waiting to be healed for 38 years, because he healed him on the Sabbath, the Jews persecuted him. Jesus said to them, my Father is always at his work to this very day and I, too, am working. For this reason the Jews tried all the harder to kill Jesus. Not only was he breaking the Sabbath, but he was calling God his own Father, making himself equal with God.

The Jewish religious leaders of that day had huge problems with Jesus. But, let’s not put all the blame on them, for that’s just a snapshot in the album of history. Let’s turn the pages of the album of history. One of the problems that religion has always had with Jesus, whatever kind of religion it may have been or is today, is that Jesus often doesn’t conform with their Bible, or at least their interpretation of the Bible.

That’s happening today. There are many religious people who have a specific detailed interpretation of the Bible which includes their belief about what the Bible itself is and is not. Anyone who appears to differ with them, well, let’s just say those people are not welcome in those churches.

So what is the Bible, exactly? Is it holy? What does holy mean? We need to define that word, don’t we? Infallible. What does that mean? Inerrant is another word people use which actually ratchets up the discussion beyond the word “infallible” because “inerrant” means without any error of any kind anywhere.

The arguments rage and, in some cases certain views about the Bible are seen as a test of faith. If you don’t agree with people about their particular interpretation of what the Bible is and is not and how it should be interpreted, then you’re out.

You know what the problem is with that bold assertion? No original manuscripts are available today. So it’s impossible for us to know whether that statement is true or false.

Before Neil Armstrong walked on the moon, I could have said the moon was made out of green cheese. But now I can’t say that because somebody’s been there and knows it isn’t. Some claim that the Bible is infallible in its original manuscripts. Well, you know what? There are no original manuscripts available, so we don’t know whether that statement is true or false.

Imagine me saying to my wife, “You know, before you first met me, and then married me, I was perfect. I had no sin whatsoever. Then you met me and eventually we married. Since the time you first met me, now after four decades you know most of my imperfections. You now know, of course, that I am far from perfect. But, before you met me I was actually perfect. You just didn’t know it because you didn’t know me then, but it’s only since I met you that I became imperfect.”

The reasoning about the Bible being infallible, without any error in the original, unavailable manuscripts is as illogical as me saying to my wife that I was perfect before she met me.

If God wanted the Bible to be completely holy as we just defined it, why did he use human beings in the production, translation and transmission of the Bible? Why use human authors at all? He didn’t have to do it that way.

Why not just give us the perfect holy, infallible, inerrant Bible produced, written and printed on the printing presses of heaven? Why not use the millions of angels at God’s disposal to write, edit, copy and then print gazillions of copies of a holy, perfect, inerrant book in every language known to man?

Why do humans have to produce all these translations, with missionaries going over and living in foreign countries for 20 years, learning the language, and then translating the Bible? Why didn’t God just go ahead and do all that for us and then dispatch all the angels like storks or like Santa Claus and simply drop the Bible down to us in heavenly parachutes? God could have airlifted the Bible “down” to us from heaven. But God didn’t give us the Bible that way.

Why did God allow humans to have Bible publishing houses with what we now call Study Bibles which generally inflict a particular interpretation on the text of the Bible? Why wouldn’t God have thought this whole thing through?

After all, he is God. God could have decided this whole Bible writing, editing, production, publishing, translating business would just be confusing and do it all himself in heaven with heavenly printing presses and heavenly translators and heavenly publishing houses. But he didn’t do that, did he?

When humans give the Bible honor, glory and worship they are in effect, as Paul says in Romans 1:25, worshipping the created rather than the Creator.

There are some who teach baptism means complete, bodily immersion and that anyone who is not fully immersed under the water, completely, when they get baptized, is not properly baptized and they probably need to do it again so they can get it right, so that God will truly forgive them, redeem them and love them because God is not going to truly redeem, forgive and love anybody until they go all the way under the water. None of this sprinkling or pouring stuff.

Now I happen to believe that, in practice, when people are baptized, that total immersion is probably to be favored. But, you know what? I was sprinkled as an infant and I know many other people who were, and I am not going to say that God doesn’t honor that form of baptism because he doesn’t tell me that he doesn’t.

Many, if not most, of those who teach the bread and wine (or grape juice) given during Communion, the Lord’s Supper or Eucharist is literally the body and blood of Jesus, will not allow anyone who happens to be visiting their church and does not accept their interpretation of the Bible on this matter to come to the Lord’s table with them.

Again, I realize that the generic term the “Word of God” is popularly used as a synonym for the Bible.  However, at the very least, if we insist on using that term to describe the Bible then it should appear in the lowercase—the Bible is the word of God. Jesus, as John 1:1 explains, is the Word of God.

The 66 books codified as the Bible, a written revelation from God, came into existence over a period of time. Human beings were intimately involved with the writing, editing, copying and translating of the word of God, the written revelation of God. The Bible is not divine.

It’s possible to study and learn the Bible backwards and forwards in Greek, Hebrew and Aramaic and yet not come to know Jesus, the true Word of God. You can know almost everything there is to know about the book of paper and ink, and not know the Lord of your life.

We can understand God and God can be revealed to us through its pages, but the Bible is not the only place and only way and only experience through which we might come to know God.

But we do not worship the Bible. We do not believe it to be infallible. We believe that God alone is infallible. No human or human product is infallible. The Bible helps us to know God as God reveals himself to us through its pages.