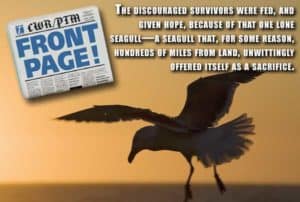 Praise the LORD, O my soul; all my innermost being, praise his holy name. Praise the LORD, O my soul, and forget not all his benefits—who forgives all your sins and heals all your diseases, who redeems your life from the pit and crowns you with love and compassion, who satisfies your desires with good things so that your youth is renewed like the eagle’s.—Psalm 103:1-5

Every Friday night Eddie walked down to an old broken down pier on the eastern seacoast of Florida, walking slowly, slightly stooped over while carrying a large bucket of shrimp. The sea gulls flocked to the old man because almost every Friday night he provided a shrimp feast for them.

He returned to the United States at the age of 29 as a war hero. He continued his love of speed and engines, eventually securing a controlling interest in the Indianapolis Speedway, and then, in 1938, shortly before he turned 50, becoming president and director of Eastern Airlines.

When World War II started Eddie Rickenbacker was asked to be a special representative of the Secretary of War, inspecting air force bases in the Pacific. In October, 1942, Rickenbacker and seven men set out on a mission over the Pacific in a B-17—the old Flying Fortress. Eddie was 52 years of age, certainly not a young man anymore.

They ran into trouble and had to ditch their plane in the South Pacific. They crash landed in an area that was beyond the reach of radio. The men wound up in two five-man and one two-man life rafts—with most of their food and water still on board the plane, which sank. They had three oranges between them, which they eventually divided among themselves and ate.

For almost a month Rickenbacker and his friends, adrift in life rafts, fought the rough waters of the Pacific ocean. They fought the scorching sun, they fought sharks and they fought their biggest enemy—starvation—in a life or death battle of survival.

That day started with a prayer for deliverance and a hymn of praise. Then, in the oppressive heat, the men dozed off in their raft. All they could hear was the gentle slap of waves against their raft. Suddenly Rickenbacker felt something land on his head. He knew immediately that it must be a seagull. Others in the raft stared at that gull but no one said a thing. That seagull was their lifeline. That seagull, if Rickenbacker was quick enough, represented desperately needed food. Eddie caught that seagull. The men ate its flesh, and used its intestines to catch fish. The fish provided more food, and more bait, and the cycle continued. They were able to paddle toward occasional rain squalls, and collect fresh water in their clothing, squeezing it out into bailing buckets.

The discouraged survivors were fed, and given hope, because of that one lone seagull—a seagull that, for some reason, hundreds of miles from land, unwittingly offered itself as a sacrifice. That seagull started a cycle of life that enabled all but one of the men to survive 24 days adrift in the Pacific Ocean.

Eddie Rickenbacker survived that ordeal, but he never forgot. Years later, now living in Florida, every Friday evening Rickenbacker, now an old man with white hair, would fill his bucket with shrimp and walk down to the shore to feed the gulls. It was his way of remembering a day long past when God provided for him and his friends, just like God gave the Israelites manna in the wildnerness.

I will always remember the story of Eddie Rickenbacker and the seagull. It’s one of the first stories of World War II I ever learned. When I was in the first or second grade, my mother purchased several inspirational books for me. One of the books had a story of the miracle that happened to Captain Eddie Rickenbacker. The book was an illustrated story book—and the illustrator of this specific story decided to picture the moment when the seagull landed on Rickenbacker’s head, the moment when Rickenbacker started to prepare to quickly capture the seagull. It’s a story, and a picture, I will never forget.

There are lots of things each one of us can’t forget.

We will never forget, as hard as we try, some of the most painful and embarrassing and humiliating things that have happened to us. We wish they had never happened, but in our heart of hearts we know they did.

But in addition to painful things we can’t forget, God tells us to make sure we remember the blessings—the benefits—specifically the benefits he provides us.

In Psalm 103, God inspired David to write about other things we should never forget—there are five specific things in this passage we are encouraged to remember. In verse two David says to praise God and forget not all his benefits—

And then David lists five benefits:
1) God forgives all our sins.
2) God heals all our diseases.
3) God redeems our lives from the pit.
4) God crowns us with love and compassion.
5) God satisfies our desires with good things.

1) God forgives ALL of our sins. Not just some of them. ALL of them. Notice the tense of forgive—for that matter of all five of these benefits. It’s written to us and for us in the present tense. We’re not just talking about our past sins—we’re talking about present sins—and of course, by extension, we are talking about our future sins.

Someone may try to, for whatever reason, convince you that God really hasn’t or won’t forgive you. Someone may try to tell you that God may renege on his forgiveness if you don’t hold up what they call “your end of the bargain.” But God’s forgiveness of our sins is no business deal. This is no contract for services rendered. We have nothing to give God that would convince him to forgive all of our sins. He does this because of his love, out of his grace.

2) God heals ALL of our diseases. The skeptic says, “A-ha! Look at you lame-brain Christians. Can’t you see the evidence in front of your collective noses? God doesn’t heal all of your diseases. People who are Christians die of disease just as frequently as do those who are not.”

That’s right! The Bible makes it clear that humans will always struggle with their flesh, their mortal bodies, with sickness and disease, not to mention lust, greed, vanity and envy, as long as we have our bodies.

This verse is obviously not a guarantee of physical healing, every time, all of the time, for all Christians. All of our physical sicknesses and diseases will eventually be healed—they will terminate—at our physical death. But, as Jesus said to Martha, Lazarus’ sister, “I am the resurrection and the life. He who believes in me will live, even though he dies; and whoever lives and believes in me will never die” (John 11:25-26).

Psalm 103 is talking about spiritual healing. The same kind of healing Jesus talked about in John 11 as he talked with Martha, Lazarus’ sister.

Because of Jesus, because of his life, we are given eternal life—we conquer, through Christ, death and the grave. ALL of our diseases are healed.

3) God redeems us from the pit. Apart from God we are slaves, in a pit. We are slaves to our sinful flesh, we are addicted to behaviors that keep us in bondage. We are even spiritual slaves, slaves to those who keep us in religious and philosophical chains, through fear, superstition and ignorance.

But we have a Redeemer, and it is through his precious blood that the price of our freedom has been paid. We are bought back, we are redeemed from the pit.

We are forgiven, healed and redeemed because of God’s lavish goodness—because of his extravagant generosity— because of the riches of his grace.

God’s primary attribute is unconditional love—no, more than that—love is not an attribute of God as much as it is the very defining characteristic of his being, love is his identity. Love is who and what he is.

Out of his love he determines, simply because of his love and goodness, that he will crown us with his love and compassion. He crowns us with the crown of his grace. Undeserved and unmerited—that’s what makes it grace.

5) God satisfies our desires with good things. There is nothing here, or in any other place in the Bible, where God guarantees to always make us feel good, to ensure that our senses are always gratified. God does not, often for our own good, give us everything we want.

God will define and determine what is good for us. But rest assured, it will be good for us.

We can so often focus on what we want God to do for us—doing something for us is generally about the here and now—doing something in us is about new life, eternal life, a transformation of our physical lives into eternal lives.

These are the five benefits God inspired David to tell us to never forget. These are benefits provided to us by a loving God.